Heidelberger Druckmaschinen AG (HEIDELBERG) is once again underlining the company’s technology leadership in its core business with a world premiere. The option to increase the printing speed of the Speedmaster XL 106 to 21,000 sheets per hour makes this high-performance system the world’s fastest sheetfed offset press and means an annual output of over 100 million prints is now also possible in folding carton production. This press is a particularly good option for companies producing packaging in the 70 x 100 format, who are calling for ever higher machine outputs and end-to-end automation. The increase in printing speed from 18,000 to 21,000 sheets per hour on the Speedmaster XL 106 is especially attractive to these users. The economic benefit is an eight to ten percent higher net output and – provided the full potential productivity is utilized – amortization in around two years.

In order to achieve this, HEIDELBERG has optimized some 200 components throughout the entire system, from feeder to delivery. For example, two servo motors now drive the feeder directly and, in the delivery, the weight of the gripper bars has been reduced and they have been adapted to the new printing speed to ensure stable and reliable operation.

“Right from its market launch in 2004, XL technology from HEIDELBERG has set the benchmark in terms of productivity, performance, and reliability for high-end applications in our sector. HEIDELBERG has continuously enhanced this successful machine platform ever since,” says Dr. Ludwin Monz, CEO of HEIDELBERG. “With the newly unveiled Speedmaster XL 106, HEIDELBERG is taking sheetfed offset printing performance to the next level and enabling folding carton manufacturers in particular to become more competitive,” he adds. 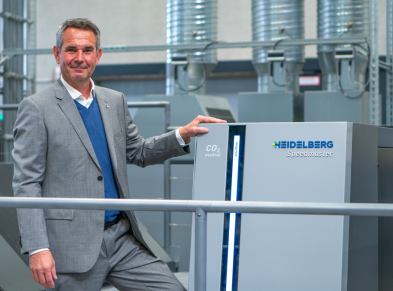 Cardbox Packaging, an international packaging manufacturer headquartered in the Austrian town of Wolfsberg with over 250 employees, makes high-quality and technically sophisticated carton packaging – primarily for the food, beverages, confectionery, tobacco, and cosmetics industries, and also for the healthcare market. The company enjoys a long and successful partnership with HEIDELBERG. Cardbox mainly uses technologies from HEIDELBERG when it comes to further expanding press and postpress operations at its international sites. Consistently high productivity and maximum machine availability are among the keys to success. Whenever possible, Cardbox maximizes the potential of the equipment it uses. This includes the Speedmaster XL 106 that has been in operation at the Wolfsberg site since 2018 and always pushes productivity to the limit. That makes Cardbox the ideal pilot user for the new Speedmaster XL 106 with its maximum speed of 21,000 sheets per hour. The company recently took this high-performance press into operation.

“Competition is fierce on the international packaging market. We make no compromises when it comes to quality, reliability, and keeping to delivery deadlines. Consistently high productivity is a key competitive factor in this regard,” says Roland Schöberl, Managing Director of Cardbox Packaging Holding GmbH. “We are therefore delighted to be working with HEIDELBERG and piloting the new Speedmaster XL 106, currently the world’s fastest sheetfed offset press. Following the start-up phase, we expect it to give us a big productivity boost,” he adds.

At the end of the year, to complement the new high-performance press system and optimize the productivity of its postpress operations, too, Cardbox will additionally be commissioning two high-output MK Mastermatrix die cutters that have also only just been launched.

The new Speedmaster XL 106 was unveiled at the end of October during the Packaging Day held at the HEIDELBERG site in Wiesloch-Walldorf with the motto “Win the Packaging Race”. Over 300 existing and potential customers from all over the world took part in this event to find out about the latest trends on the packaging market and the associated solutions being offered by HEIDELBERG and its partner MK Masterwork. The presentations focused on process automation, sustainability, operational excellence, and industrial solutions for the postpress packaging segment. A live broadcast from Cardbox Packaging’s new production center in Wolfsberg showed participants the new Speedmaster XL 106 in operation.

Series production is scheduled to start in fall 2023, and further pilot installations will gradually follow over the coming months.