Commentary: The Printing Industry Has Regained Its Good Mojo

The slightly misquoted line in the 1989 film “Field of Dreams” spoken by Kevin Costner, “If you build it, they will come,” could be altered further to “If you build it, will they come?” regarding last month’s PRINTING United Expo in the Las Vegas Convention Center. After all, the expos planned for Atlanta and Orlando in 2020 and 2021, respectively, had to be canceled due to the lingering COVID-19 pandemic. So, despite a blockbuster inaugural PRINTING United Expo 2019 in Dallas, uncertainty remained as to how well this year’s show would be attended.

But, as the three-day expo kicked off Oct.19 with a virtual sea of showgoers, it quickly became apparent that the registrants representing 121 countries came to see what was built — to the tune of approximately 30,000 total registrants.

Anticipating pent-up industry demand for a face-to-face exhibition, 701 exhibitors filled two halls, totaling one million square feet of space. The vast majority filled their stands with a diverse range of operating equipment geared toward the commercial, digital, apparel, digital textile, packaging, mailing and fulfillment, and graphics/wide-format markets. They well-knew that the No. 1 draw for a printer or mailer to attend a trade show is to be able to check out, and often compare, state-of-the-art equipment from multiple vendors running on the show floor. The ongoing worker shortage and rising cost of labor have made the drive for automation and greater efficiency more paramount than ever for print services providers serving virtually every market.

Attendees surely didn’t go home disappointed. PRINTING United Expo freight exceeded five million lbs. at this year’s show. “One of the tremendous reasons this year’s event was so successful is because of all of the equipment running multiple substrates and soft goods on the show floor,” Mark Subers, president of PRINTING United Expo, proclaimed. “This is what attendees wanted to see and experience, and the exhibitors delivered.”

The 2022 PRINTING United event reminded me of the annual PRINT/Graph Expo shows during the ’80s and ’90s in Chicago — before they declined. Remember walking into the show floor entrance at McCormick Place seemingly forever just to get past the large Heidelberg booth? 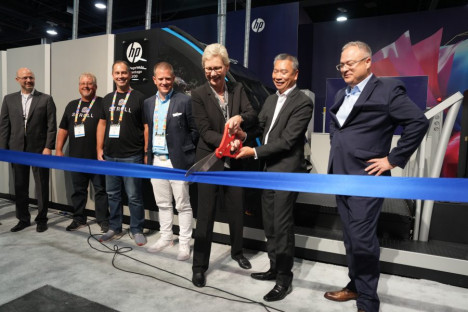 As digital printing has moved to the forefront, HP Inc. similarly dominated this year’s exhibition with its own 21,000-sq.-ft. exhibit area filled with the brand-new HP PageWide Advantage 2200 inkjet web press, coupled with HP Indigo 100K, 15K, and 6K LEP-technology digital presses, as well as a range of HP wide-format printers.

Production inkjet printing presses were also shown by SCREEN, Kyocera, and RISO, and toner-based digital machines were on display in the Canon and Kodak exhibits. 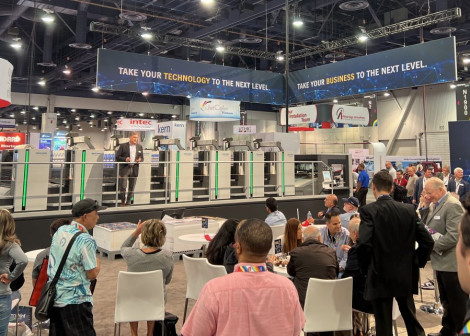 But perhaps most striking about this year’s show was its level of positive energy. Exhibitors and attendees remained highly engaged, prompting many purchases, business connections, and peer-to-peer networking conversations. It was readily apparent that the printing community was recharged and glad to be interacting in person again, creating a global reunion of sorts.

The excitement also affirmed the one-roof concept the expo was built around to unite all sectors of the printing community. Just seeing the sheer breadth of printing and finishing applications catering to all print market segments — all within one trade show venue — generated a sense of empowerment and optimism for what the future holds. Tarnished by these past few difficult years, our industry’s good mojo is back.