You may have heard that the Bureau of Labor Statistics (BLS) unit of the U.S. Department of Labor — which tracks current employment levels for numerous industries — recently determined that commercial printing, screen printing and print-related support activities have become “too small or too concentrated” to be tracked by the BLS going forward. This latest government salvo adds just another negative headline to what’s become a common misconception among the general public, mainstream media and governmental agencies: the printing industry is dying or, worse, dead. Yes, industry employment has declined, but the main drivers of that aren’t due to a dismal outlook for the graphic arts industry.

As Andy Paparozzi, chief economist of the Specialty Graphic Imaging Association (SGIA), points out, the BLS decision reflects an outdated and largely misunderstood view of the current state of our industry.

“The printing industry is adopting and expanding its role in the communications mix on all key fronts, including personalization, integration and interactive/mobile,” he says. “In fact, we’re actually expanding and becoming even more important to the American economy. So, this is a case where numbers do not really tell the [true] story.”

According to the most current (2016) data from the U.S. Census, commercial printing and its related support activities employed 446,089 people, with 25,521 establishments generating nearly $82 billion in combined sales. Paparozzi admits that the industry did lose 44,000 jobs from 2010 to 2018, comprising an almost 10% decrease in employment. 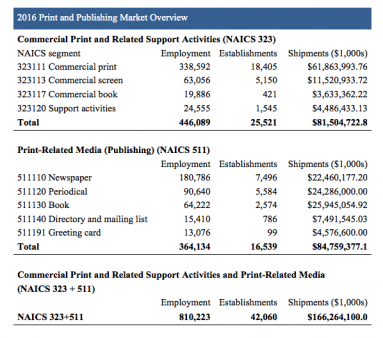 This chart depicting the 2016 Print and Publishing Market Overview was gathered from the most current data from the U.S. Census. Courtesy of Printing Industries of America. Click to enlarge.

But, he counters, that was more the result of ongoing productivity advancements — not due to a decline in demand for our ever-expanding range of products and services. In fact, sales per employee are actually up 24.4%.

Consequently, Paparozzi notes the printing industry is now competing against other industries to attract workers with different skills, such as data analysis, marketing, mailing, fulfillment and logistics expertise, as well as salespeople with consultative sales expertise.

Ronnie Davis, senior VP and chief economist, Center for Print Economics and Management, at the Printing Industries of America (PIA), echoes many of Paparozzi’s sentiments.

Davis contends that the BLS’ definition of the printing industry remains too narrow. If you add in print-related media — such as newspaper, periodical, book, directory and greeting card publishers — print’s economic footprint nearly doubles to $166.3 billion in annual shipments and comprises more than 42,000 establishments and over 810,000 employees in total.

Like Paparozzi, Davis acknowledges that there has been a decline in industry employment. But that, too, can be misleading because large U.S. industrial sectors with declining employment still typically hire more people annually in comparison to their smaller industrial counterparts. Davis estimates that the printing and print-based publishing industries combined hired between 40,000-45,000 new workers in 2017.

Many of these replacement employees possess different skill sets, he notes, as our industry continues to evolve away from conventional printing processes to digital and more service-oriented business models.

One negative ramification from the recent BLS decision, according to Davis, is the impact it may have on state and federal funding for print-related vocational/technical programs at community colleges and universities, whose funding levels are often determined and validated, in part, using BLS data.

PIA’s VP of government affairs, Lisbeth Lyons, is lobbying on Capitol Hill for support to reverse BLS’ decision, but Davis admits it is an uphill battle since it’s not a topic that will draw much, if any, attention.

Instead, it’s going to take an industry-wide effort to change hearts and minds about the exciting job opportunities (paying decent wages, with benefits) that exist for job seekers with the skill sets our industry needs. Aside from coordinated national efforts driven by industry associations, that strong message needs to sprout at the grassroots level by printers within their local communities.

Spring is almost in the air. There’s no better time than now to help nurture our industry.