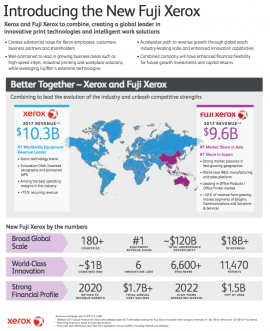 Click on the image to enlarge to view a factsheet of the new Fuji Xerox.

Sometimes rumors really do come true. After several weeks of speculation in the general business press about a possible coupling, today Xerox Corp. and Fujifilm Holdings announced a definitive agreement to combine Xerox and their longstanding Fuji Xerox joint venture, creating an $18 billion company. Fujifilm will own a controlling 50.1% of the combined company, marking the end of Xerox as an independent company dating back to its founding (The Haloid Photographic Co.) in Rochester, N.Y., in 1906.

The combined company, which has been approved by both companies' board of directors, will be named Fuji Xerox and will maintain dual headquarters in Norwalk, Conn., and in Tokyo, with a presence in more than 180 countries. The $6.1 billion acquisition will combine Xerox with the existing, 56-year joint venture (called Fuji Xerox) between the two companies that primarily serves the Asia-Pacific region, of which Fuji owned a majority 75% stake. According to an article in the Financial Times, the deal structure, which is expected to close in the second half of this year, is somewhat unusual in that it "will be carried out in three phases that will effectively allow Fujifilm to retain cash to carry out acquisitions. Using $6.1 billion in bank lending, Fuji Xerox will first buy back the 75% stake in the joint venture from Fujifilm. The Japanese group will then acquire 50.1% of the new shares of Xerox by selling its 75% stake, and Fuji Xerox will ultimately merge with Xerox." 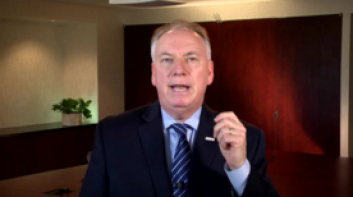 Click on the image to watch a message from Jeff Jacobson, CEO, on Xerox combining with Fuji Xerox.

Under the terms of the agreement, Xerox shareholders will receive a $2.5 billion special cash dividend, or approximately $9.80 per share, funded from the combined company’s balance sheet, and own 49.9% of Fuji Xerox at closing. The combined company will trade on the NYSE under Xerox's existing ticker symbol, XRX, and the Xerox and Xerox Fujifilm brands will be retained in their respective markets. Upon close of the transaction, current Xerox CEO Jeff Jacobson will serve as CEO of the new Fuji Xerox. Fujifilm Chairman and CEO Shigetaka Komori will serve as chairman of the combined company’s board of directors. The board will include 12 members, seven of whom will be appointed by the Fujifilm board. Five independent directors will be appointed from the Xerox board.

Fujifilm Acquires Xerox: What Really Drove the Deal to Happen?

Printing Impressions reached out to both Fujifilm and Xerox seeking interviews with senior management to provide further detail how the transaction will impact the production printing market, but none were available in time for our quick-turnaround publication date. From my perspective, this consolidation is being driven more by diminished revenue streams and changing market conditions in the office printing sector, more so than in the future outlook for the production printing space.

How much the Fuji/Xerox coupling was also hastened by an activist shareholder group that had been calling for the ouster of Xerox's "old guard" board and CEO Jacobson may never be fully known. As reported Jan. 22 in Printing Impressions, the first and third largest Xerox shareholders (representing more than 15% of outstanding shares) - Carl Icahn and Darwin Deason, respectively - had announced a partnership to solicit proxies to elect four new individuals to the board of directors at the 2018 annual meeting of Xerox shareholders.

Aside from making several demands, that press release also specifically addressed the rumors of a Fuji/Xerox merger and waged a tirade against Jacobson: "The Wall Street Journal recently reported that Xerox is in talks with Fujifilm regarding an array of potential transactions that may or may not include a change of control of Xerox. We are not predisposed to approve or disapprove of any such transaction, whether with Fuji or any other party. But if Xerox is indeed exploring a transaction with Fuji that may result in a change of control (which to our view would make sense since we, like many others, believe consolidation in this industry is inevitable), then we implore the 'old guard' directors - who have historically lacked the intestinal fortitude to challenge and demand accountability from Xerox management - to not do us all the tremendous disservice of allowing Jeff Jacobson to lead the negotiations. He is neither qualified nor capable of successfully running this company, let alone negotiating a major strategic transaction that will do more than save his own job."

In today's announcement, Fuji and Xerox pointed out the benefits that they believe the transaction will provide:

But, of course, one of the drivers to a consolidation transaction of this magnitude is promise of economies of scale, which results in the elimination of redundancies and, in reality, job layoffs. Just prior to today's announcement, Fujifilm Holdings revealed it was eliminating 10,000 jobs within Fuji Xerox in conjunction with a lower operating income forecast for fiscal 2018, the bulk of which would likely be in the Asia-Pacific. 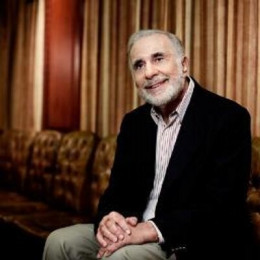 "Of the total $1.7 billion cost savings, $1.25 billion is related to the synergies that will be achieved through the transaction. In addition, the combined company will benefit from a cost reduction program commencing immediately at the existing Fuji Xerox joint venture, which is targeted to generate approximately $450 million of cost savings on an annualized basis. These amounts are incremental to Xerox’s ongoing Strategic Transformation initiatives. The new company expects to incur approximately $1.4 billion in one-time integration and restructuring costs, mainly in the first three years."

From a synergistic standpoint, in today's press release Fujifilm's Komori extolled the technology and intellectual property advantages - including inkjet and Artificial Intelligence - that will result.

“Fujifilm and Xerox have fostered an exceptional partnership through our existing Fuji Xerox joint venture, and this transaction is a strategic evolution of our alliance," said Komori. "The Document Solutions business represents a significant part of Fujifilm’s portfolio, and the creation of the new Fuji Xerox allows us to more directly establish a leadership position in a fast-changing market. We believe Fujifilm’s track record of advancing technology in innovative imaging and information solutions - especially in inkjet, imaging, and AI areas - will be important components of the success of the new Fuji Xerox.”

Xerox's Jacobson was similarly upbeat: “The proposed combination has compelling industrial logic and will unlock significant growth and productivity opportunities for the combined company ... The new Fuji Xerox will be better positioned to compete in today’s environment with truly global scale, increased presence in fast-growing markets, and innovation capabilities to effectively meet our customers’ rapidly-evolving demands. In addition, the combined company’s strong financial profile will enable investments that support continued market leadership, while also providing opportunities for increasing capital returns over time.”

Only time will tell how successful this blockbuster transaction will play out. It will also be interesting to see if it will spur further consolidation among other major players on the supply side of the printing industry. Either way, it's going to be a wild ride. The ongoing twists and turns in the printing industry are surely not well-suited for the faint of heart.