(Editor's note: In today’s printing industry, the concept of innovation is wide in definition, but rather narrow in its goal. Leading companies have grasped many tools to define themselves, increase profitability, and differentiate. They utilize new technologies, systems integration, an expanded product mix, exemplary customer service, and more.

The company profiled below — among the 2022 class of six Printing Impressions’ Innovators of the Year — was nominated by a group of printing industry experts and consultants who identified the business as notable. The summary that follows shares what makes it innovative, interesting, and exceptional.)

Every company has a choice when it comes to the direction of its operations: it can either move forward, updating its technology and processes, or stand still. For Printing Impressions 2022 “Innovator of the Year” Modern Litho, the first word in its name says it all. With a focus on continually improving its efficiency for the benefit of customers and employees, along with strengthening its relationships with technology partners, it has transitioned its workflow to a cloud-based system and upgraded its MIS. As Pat McGrew of the McGrewGroup says, “Modern Litho is a company to look to for their path to modernizing.”

Established in 1937, Modern Litho is a full-service commercial printer with digital, wide-format, sheetfed offset and half-size web offset, and packaging capabilities. “We are doing the gamut of print today,” Jim Tomblinson, VP of operations, points out.

While he says the company is split between publication and commercial work, it is heavy in high-quality book production, printing for 46 states. “We are a huge believer in books,” Tomblinson notes. “People love books; they want to feel and touch them. Print is alive and well.”

“We don’t say no a lot to the types of jobs that we do because we have quite a scope of abilities in one plant or another to be able to print and finish those products,” according to Tomblinson.

Not Afraid to Be an Early Adopter

What has also enabled its diversified offerings is Modern Litho’s valued partnerships with its OEMs and suppliers. “Today in the print world we are convinced more than ever that it takes good vendor partners to be successful, so that is one of our focuses,” he says, citing Kodak and Heidelberg among these partners. “We work with them, we do betas and alphas, and test a lot of technology. We’re in the forefront of that because we believe it’s so critical to our growth and what we want to do for the future.”

And it is with these partnerships that Modern Litho has advanced its operations in the past few years. While having multiple facilities has been beneficial for being a one-stop shop, it presented workflow concerns with a non-cloud-based system. “If we lost our internet in Jefferson City, that meant all the plants froze, and that also meant all the customers froze — not a smart way to do business, but it’s what we had to do,” Tomblinson says. 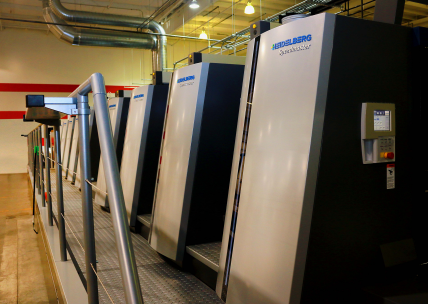 That is, until, he says, discussions began about moving Kodak’s Prinergy system to the cloud a couple of years ago. “Kodak created a technology and structured partnership with Microsoft that made sense for us to finally move our Prinergy system into the cloud so that it is up 24/7,” Tomblinson adds, noting that if Modern Litho loses internet, its customers worldwide can still communicate with the team, upload files, approve files, etc., with any of the production facilities. In addition, it enables employees to work offsite without security risks.

“When that happened, not only did I sleep better, but we were more secure, more scalable, [and] the cost is not any more than what we were already having to do on the ground,” Tomblinson reveals.

In addition to this 24/7 cloud-based system, Modern Litho focused on another aspect of its business: its MIS software, which Tomblinson notes was an old legacy system that was no longer being upgraded. “The MIS software company no longer wanted to invest as it should,” he adds. “They were really taking us backwards and we weren’t going anywhere.”

Enter Kodak again, which had heard similar concerns from other clients and partnered with Microsoft and MIS provider PrintVis. This collaboration created a technology with which Modern Litho became the first company to “invest a lot of blood, sweat, and tears into changing, developing, and creating an MIS that could be used by printers all over the country,” according to Tomblinson.

“It’s not for digital only; it’s not for commercial only,” he adds. “We [have and are] creating with Kodak and their partners an MIS system that actually will be able to service it all, and that’s something that’s not been done.

Live since April and continuing to develop elements the operation has never had before, the MIS system is integrated into Modern Litho’s Prinergy system, and will integrate into its Heidelberg servers to give the team accurate data. As Tomblinson notes, it’s a complete package — not just for the shop floor or accounting, but the entire plant. “We’re pretty excited about where we’re going and the advancements that have been made,” he says, noting its 24/7 multi-plant opportunities and anticipated scalability for mid-to-large-size printers. “It’s going to be something we all can use and benefit from.” 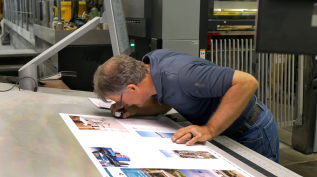 “The team at Modern Litho had every right to keep doing what they had always done and keep growing their business, but they didn’t,” McGrew praises. “They did their research and found that, by moving to a cloud-centric solution for their prepress needs, they could both speed the path of their work into production and achieve a flexibility that mitigated risk at the same time. It took faith in their vendor (Kodak) and faith in their internal team, as well as the support of management to make it pay off. And it has!”

Not surprisingly, when it comes to Modern Litho’s future, Tomblinson says it continues to look at technology and coinciding opportunities, having installed a new eight-color Heidelberg sheetfed offset LED-UV perfector in its Kansas City plant that will help the company explore further growth in packaging. Leadership also eyes expansion opportunities as they avail themselves.

There is no doubt that Modern Litho is an innovator focused on progression. Ironically, Tomblinson recently read an article persuading companies to continue using their old MIS systems. “[With these] old MIS systems that are out there, that are not integrated — nor are they going to be — companies are going to stay right where they’re at or go backwards if they’re using them,” he says.

“This is a new day; this is a new time to step out and really create something for the future.”