2021 Rising Star: Angie Wishard Is a Passionate Advocate for the Printing Industry 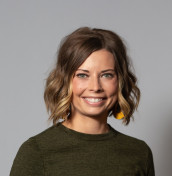 Angie Wishard remembers that, on the dairy farm where she grew up in rural Wisconsin, hard work was the everyday definition of success.

“I’m very, very well versed in hard work,” she says. “I am extremely determined.” That deep-seated work ethic is the foundation of the success she is building at SeaChange Print Innovations, a Twin Cities provider of print-based omnichannel marketing services that she joined in May of last year.

Her career path to SeaChange, ranked No. 198 on the most recent Printing Impressions 350 list of the industry’s largest firms, progressed in an orderly sequence: first as a receptionist and later as a sales associate at a printing business in St. Paul; then in a brief stint at a marketing agency, followed by several years of selling paper for Sappi North America.

SeaChange was one of her Sappi accounts, and the company’s CEO and president, Wendi Breuer, had been a colleague at the print firm where she started out. Wishard says Breuer’s invitation to join the sales team came at “the right time to make that transition back to the commercial print side.”

She notes that at SeaChange, her account management responsibilities run the gamut from printed collateral, direct mail, magazines, and annual reports to email campaigns, landing pages, social posts, and omnichannel support. The common denominators for success in these assignments, according to Wishard, are integrity and commitment.

“I really care about what I do. I care about my customers, and I care about the brand I represent,” she says. “We have some core values here at SeaChange that we take very seriously, and those core values align with my personal values. It’s really all about being authentic, and doing the right thing. It doesn’t have to be more complicated than just caring about what you’re putting into the world.”

As Wishard points out, “manufacturing isn’t perfect,” and getting it right for the customer can mean putting in days that start early and end late, as hers often do. But, she claims to thrive on the pace.

“It’s almost a bit of a runner’s high,” she notes. “There’s constantly something going on ... I’m answering questions, I’m meeting with people, I get to be extremely creative and strategic. It’s very stimulating, and it’s what I was drawn to when I first entered the industry. That stimulation keeps me going.”

Among the career milestones Wishard points to with special satisfaction is helping Sappi roll out a global CRM system, a project that involved travel to technical conferences in Germany. More recently, she’s expanded into print advocacy as a speaker at industry events, including serving as a panelist in a session called “Careers in Crisis” at last year’s Girls Who Print Day. In January of this year, she also wrote a blog titled “The Future of Print is Bright, AND Better Together!” for the In-Plant Printing and Mailing Association (IPMA).

Her near-term objectives are clear. “I’m extremely heavy in new business development, which is something I’m very passionate about,” Wishard points out. “The ultimate ambition is to continue the thought leadership portion of what I’ve been doing — being an advocate for the industry on the social side, for what we have to offer.”

In this role, she’ll have straightforward advice for printers about recruiting young talent.

“I don’t think it’s as complicated as our industry has made it,” she asserts. I think it’s culture. One of the reasons why I came to SeaChange is because of the culture we have here. We don’t have a problem with attracting young talent. There’s a foundational push to have a really strong culture here.”

What this means, she explains, is that everyone is 100% enabled to speak their minds. “We all have the same goal. We all want to be successful, and we all want to help each other be as successful as possible.”

"It’s just very genuine,” Wishard says, “and it’s not anything that any other company can’t do.”