The next time you hear H. Andersen “Andy” Lyke brag about his printing company, Ripon Printers — one of the finest establishments that the Midwestern printing belt has to offer — it will likely be the first time he has done so.

That’s not to say that the president of Ripon Printers isn’t proud of his company’s accomplishments as a $50.85 million provider of commercial printing, catalogs, publications and directories (among other products). The family-owned company also has a reputation as a printer’s printer, handling the overflow work for some of the country’s biggest names.

Still, Lyke typifies traditional Midwestern values of modesty and hard work. He would much rather celebrate the efforts of his production crew, a number of whom have spent their entire careers at Ripon. That loyalty is reciprocated, and the results can be seen not only in customer satisfaction, but in the exhaustive award lists from local and national printing competitions. Lyke’s next investment initiative may need to include funding for another display case.

Through it all, Lyke gives the glory to his employees, and that team-first mentality has helped to earn him a place among the 2016 Printing Impressions/RIT Printing Industry Hall of Fame class. Lyke discovered early on that customers appreciate a good value more than a rock-bottom price. In fact, it’s something he learned as a youngster.

Value Goes Well Beyond Price
“Customers value what we bring to the table and recognize that value goes beyond price,” he says. “That was one of my early life lessons. When I was younger, I used to buy cheap Bart Starr tennis shoes. They were reminiscent of Converse, but they were poorly made and would quickly fall apart. Good shoes last longer, so you’re better off in the long run.”

Born in Chicago, Lyke, 55, and his family moved to Ripon, Wis., only a year later. His father, Doug, was a newspaperman who ran the weekly paper, and things began to really pick up after the elder Lyke purchased his first printing press in the late 1960s. The dinner table yielded many a status report on how things were progressing at the publication.

Lyke and his brother, Tim (who currently heads the community newspaper), often found their way into the shop, sweeping, cleaning and occasionally handling newspaper inserts. The idea was to keep them busy and out of the way, but Lyke remembers spending time climbing on the paper webs with his brother. 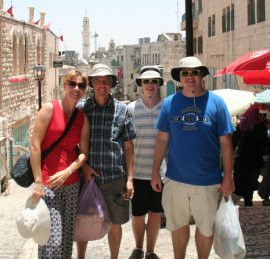 A family vacation to Israel proved to be one of the most enjoyable trips for the Lykes.

Still, Lyke didn’t have any hard and fast plans for the future while attending the University of Notre Dame. He earned a B.A. in accounting upon graduating in 1983 (and met his future wife, Jeanne, who would become a pediatrician) and began his career as a staff auditor for national accounting firm Arthur Andersen.

“I thought working there would be a good base that would give me options if and when I decided to leave Arthur Andersen,” Lyke notes. “It was valuable training for me, a good firm.”

In 1985, the company — then known as Ripon Community Printers — saw its controller leave. Lyke decided to help out. “One year led to two years, which led to five,” he says. “Then, all of a sudden, it’s 30-something years.”

Over time, Andy Lyke’s responsibilities grew. He became a VP when Doug Lyke retired in 1992. He spearheaded the creation of the company’s home-grown management information system, which included an auto count type device, and Ripon is able to customize the system at the drop of a hat, Lyke adds.

The home-grown MIS helped, but one of the bigger turning points for the company was the use of some offsite sales forces; firms out of Indianapolis and New York City were critical in getting the Ripon name established on a national level. The company also bolstered its sales with the 2012 acquisition of Sells Printing of New Berlin, Wis. The more work Ripon performed, the larger its legend grew.

“Our reputation for quality was sterling,” Lyke notes. “We had heatset web presses that we used as coldset presses. We were able to put down a superior halftone dot. And I believe that you need to treat your vendors and customers like partners. We pay our invoices early when we can get a discount, but otherwise we pay on time … we know vendors appreciate that. By the same token, when you make errors — and let’s be honest, we all make them at some point — customers appreciate it when you make it right by them.”

It hasn’t been easy in recent years: the 2008-2010 Great Recession hammered away at all businesses. In recent years, health care costs have exploded at Ripon Printers from $1.5 million out of pocket to $2.5 million in a three-year span.

Lyke feels he has developed a thicker skin over the years, and he puts a lot of faith in the many printing experts he enjoys under one roof. Those experts have proven to be an inspiration for him, from Doug Lyke to now-retired company veterans Dennis Darnick and Deba Horn-Prochno, all of whom brought decades of printing know-how to the table. He also watched with great interest at how fellow Badger State printer Quad/Graphics was able to construct its empire; Lyke has great admiration for the Quadracci family and their accomplishments.

Instilling Strong Midwestern Values
Doug Lyke, in particular, shaped Andy Lyke’s relationship approach to vendors and customers. “He was demanding, but he was also fair.” And he loves working alongside his brother, Tim.

Lyke considers himself a problem solver who can think innovatively. He relishes being in the position where he can take calculated risks, but at the same time is proud of the fact that the company is fiscally responsible.

Click here to watch a video interview with Andy Lyke.

Time is a precious commodity for Lyke, who has been active with the Great Lakes Graphic Arts Association (GLGAA) and the Printing Industries of America on the national level. He is active on the local school board and is a past president. Lyke also donates his time to causes such as the United Way, Boys Scouts of America, child care programs and the local chamber of commerce.

Speaking of the GLGAA, association president Joseph Lyman believes Lyke has a penchant for keeping one step ahead of the competition.

“Andy is the consummate print professional, the type of competitor who raises everyone’s game,” he says. “In an ever-changing print landscape, he continuously takes Ripon Printers to the next level and always provides the very best work for his clients.”

Gregg Davies, a former executive at Action Printing who is now retired, was always struck by Lyke’s high level of ethics. Davies points out that Lyke is “extremely employee oriented” and has done a spectacular job with sales growth through the years.

“Andy was always fair competition and willing to help out any time,” says Davies, who has known the Lyke family for upwards of 40 years. “When we had a bindery fire years ago — the bindery was pretty well destroyed — Andy was the first one to call to offer help. He let us bring employees into his plant. He’s just a great guy.

“After I retired, I brokered some printing through him. Ripon does a great job, the price is always what they say it’s going to be and the job is delivered as promised.”

Lyke enjoys running, reading and travel. Speaking of trekking, he has been to Israel three times. He also enjoyed the trip of a lifetime when the entire Lyke clan embarked upon a African safari in Kenya, where a warthog came up to his then three-year-old son and devoured the building blocks that he had been playing with.

Jeanne and Andy Lyke have been married for 24 years and have two sons: John, a junior at Notre Dame; and David, a high school junior.

A flying lesson as a birthday gift set Lyke on the path to becoming a pilot. He’s been flying Cessna 172s for about 20 years, and the entire learning process was richly rewarding to Lyke.

“The one nice thing about learning to fly an airplane is the fact that you become a student again. It’s helpful to be in a position of learning and remembering what it’s like to be a student,” he says. “When you’re at work and teaching people things, it’s beneficial to have a similar perspective about what they’re going through. And you want to pay attention when you’re flying, too ... that’s really important.” PI