Two Online Photo Giants to Become One with Shutterfly/Snapfish Acquisitions 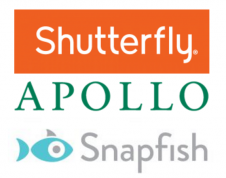 InfoTrends has been predicting for years that the photo output market would continue to consolidate, as some online vendors have shut down or been absorbed by competitors and retailers have scaled down in-store photo operations. The latest announcement is possibly the most dramatic yet, as longtime competitors Shutterfly and Snapfish have both been acquired and will be combined into one company. This is kind of like Ford merging with Chevy, which ironically has also been predicted by some automotive analysts.

At the center of this merger is Apollo Global Management, a self-described “global alternative investment manager” with some $303 billion in assets under management as of March 31, 2019. None of Apollo’s other investments appear to be in the photo industry, though there are several consumer retail companies in their portfolio. Shutterfly has been for sale for quite some time and Apollo pulled the trigger on a cash deal where it would acquire all Shutterfly’s outstanding shares for $51 each, which values out at around $2.7 billion. Apollo will also take over Shutterfly’s outstanding debt. Once the deal is complete, which is expected to happen by the fourth quarter of this year, Shutterfly will become a privately held company.

Shutterfly also announced Ryan O’Hara as their new President and CEO effective June 24. O’Hara will replace Christopher North, who announced in February that he would be leaving Shutterfly to return to the United Kingdom with his family. He comes to Shutterfly from Move Inc./Realtor.com, where he was CEO for the last four years.

In a surprise move, Apollo also announced that it had also agreed to acquire Snapfish, which has seen multiple ownership changes over the years (most recently sold by HP to District Photo in 2015). Apollo said that Snapfish owners would become “significant minority owners in the combined Shutterfly and Snapfish business.” The deal is contingent on completion of the Shutterfly deal and is supposed to close at the same time (Q4 2019). Snapfish Chairman and District Photo CEO Neil Cohen commented that “we are committed to supporting the company and continuing our relationship as a fulfillment partner.”

For consumers, there probably won’t be much in terms of initial change after the deal goes through. Apollo Senior Partner David Sambur commented that “we believe that both companies will be better positioned to operate in a competitive marketplace through their enhanced ability to invest in product innovation and deliver the best consumer experience.” This seems to imply that Shutterfly and Snapfish will continue as separate companies for the foreseeable future, while perhaps sharing expertise in product development and back-end operations. From comments made by Cohen, we can also infer that District Photo will continue to provide fulfillment for Snapfish and may also take on a bigger role as fulfillment partner for Shutterfly.

InfoTrends research shows that while Shutterfly is a leader in nearly every popular photo product category like prints, photo books, cards, and wall décor, Snapfish has been falling in popularity over the last few years. Our 2018 US Photo Printing Survey asked consumers which online sites they were using ordering photo prints and Snapfish ranked fifth at 15% behind Shutterfly (35%), walmart.com, cvs.com, and walgreens.com. Snapfish has fared even worse in popular photo products. In our 2018 US Photo Merchandise Survey, only 3% of consumers said they placed their last photo card order with Snapfish, which put them 11th on the list. Shutterfly was second with 18%. In photo books, Snapfish was 9th with 4%, while Shutterfly was first with nearly 34%.

Short term, we may see Shutterfly positioned more as a premium provider of photo products and prints, with Snapfish positioned as a lower-cost alternative for more budget-minded consumers. Long term, we wouldn’t be surprised to see Shutterfly and Snapfish merge completely, with one company name (Shutterfly) and one website. It should be an interesting ride.

Related story: Shutterfly Deploys Scodix Systems in Locations Across the US

David Haueter is Associate Director of InfoTrends’ Photo Printing Trends and Photo Merchandise Trends services. His responsibilities include product coverage, trend analysis, primary market research, and gathering forecast data for the photo print and photo merchandise markets. Prior to joining InfoTrends, Mr. Haueter acted as Principal Analyst for the Digital Documents & Imaging group at Gartner. In this role, he focused on digital camera, photo printing, inkjet printer, and multifunction product markets. Mr. Haueter has also held several marketing positions with Sharp Electronics Corporation where he worked for six years. Mr. Haueter began his career at Xerox Business Services where he worked in various positions, including Account Executive and Site Manager. Mr. Haueter received a B.A. in English from Nyack College and also an MBA in Marketing from Pace University. In his spare time, Mr. Haueter is an avid photographer and has had his photos published in several automotive publications.

END_OF_DOCUMENT_TOKEN_TO_BE_REPLACED
Upcoming Webinars
The “Rolling 20s” Are Here: Are You Ready?