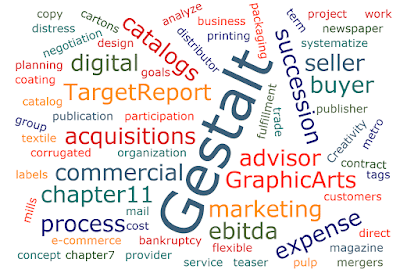 Gestalt
[guh-stawlt]
noun - a perceptual pattern or structure possessing qualities as a whole that cannot be described merely as a sum of its parts.

The Target Report has been chronicling merger, acquisition, and restructuring activity in the printing, packaging and related industries since 2011. Each month we publish the results of our research and analysis of the macro-trends, often focusing on a particular segment. In January, we look back at the entire year and humbly offer our general projections about the coming year.

In the absence of having our own crystal ball, we attempt to bring some science to the art of making projections. In essence, we overlay and correlate industry merger and acquisition transactions with restructuring activity (bankruptcies and closures) to form a predictive model applied to specific industry segments that make up the whole. (Wow – this sure is a dry start to what we hope will be an interesting peek into our extensive information and data). So there you have it - a theoretical foundation for the following projections.

As you read through the following information, please keep in mind that many companies in the printing, packaging and related industries have more than one specialty. For our purposes here, we designate what we deem to be the primary service offering of the companies involved, and most often assign a secondary specialty that differentiates the company.

During 2015, we found 212 M&A transactions that were of interest. Of these, we designated 45 as being primarily in the Commercial Printing segment. As noted previously in The Target Report, M&A activity in the commercial printing segment was fairly brisk during the beginning of 2015, but the momentum went out of the market in the late summer and has picked up a bit since. Transactions are occurring, but not at the rate we might expect given the improving economy and demographic trend of entrepreneurial baby-boomers reaching the age at which owners often sell their businesses. 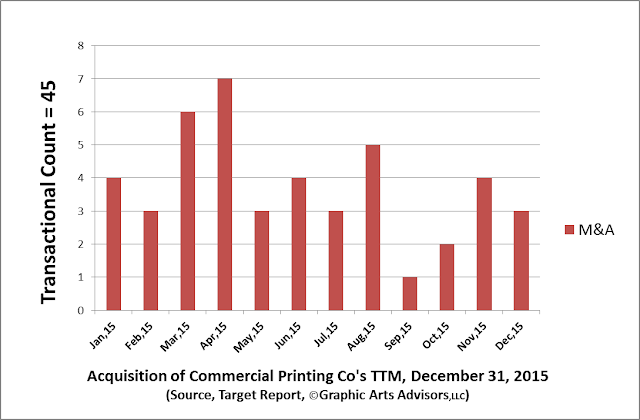 In the following graphic, we can see that almost half of the transactions occurring in the commercial printing segment were acquisitions of general (i.e. largely undifferentiated from other “job shops” offering a similar menu of graphic reproduction services). 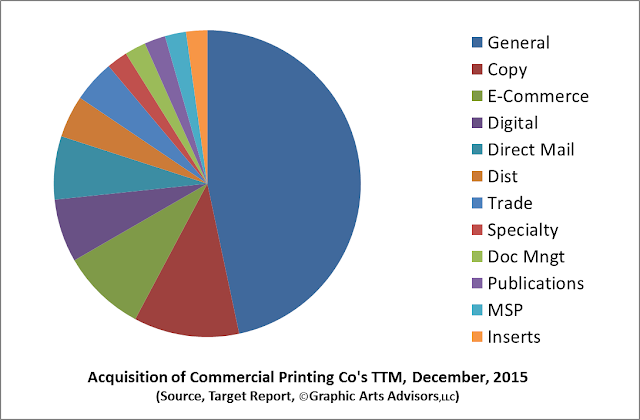 There is significant interest from active strategic and financial buyers to acquire printing companies that specialize in the packaging segment. There is good reason for this as growth and stability in packaging printing is perceived (correctly we believe) as much more sustainable and less subject to disruption from electronic media. We also know that valuations are significantly higher in the packaging segment. Nonetheless, the data from 2015 suggests that many sellers are waiting, although the tepid pace of packaging-related M&A activity in the winter and spring has recently picked up. 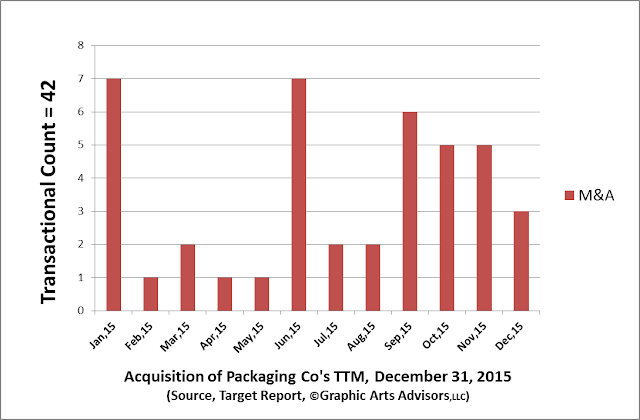 When we parse the data on packaging transactions, a clear picture emerges – flexible packaging companies are in demand, followed by their close cousin in the use of flexo technology, label printers. There were several notable transactions in the corrugated segment, especially in the latter part of the year. No surprise here as the growth in online commerce and direct delivery drives demand for corrugated cartons. 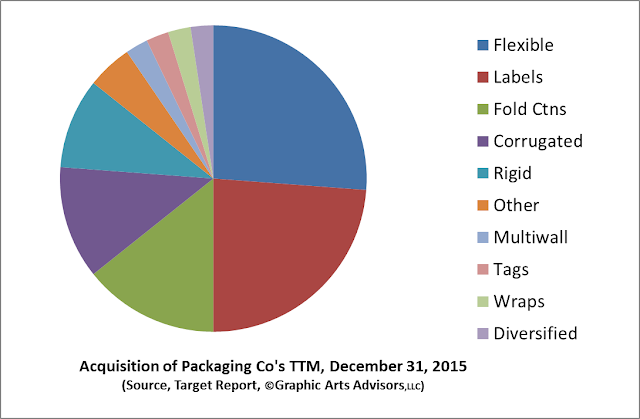