Ink-jet color presses for high-speed, high-volume printing of ducuments are seen as the next big thing in the commercial printing industry. Here's a look at the major product announcements.

The current wave of production ink-jet press introductions arguably started with the Truepress Jet520 from Screen (USA). It uses piezo DOD heads and water-based pigment inks to print a 20.4? maximum web width at a 720x360 dpi resolution and runs at speeds up to 420 fpm, equivalent to 100,000 iph (8-1/2 x 11").

Total Printing Systems, a short-run book manufacturer in Newton, IL, and Flagship Press in North Andover, MA, which serves publishers in the educational and high-tech markets, were two early adopters in the U.S. 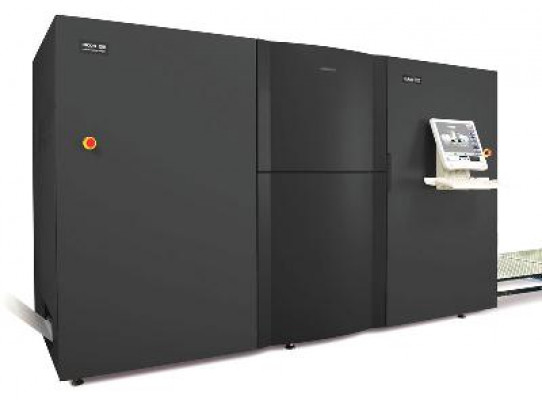 The company has added support for its new AFP Color Management Architecture with an eye toward transpromo printing applications. 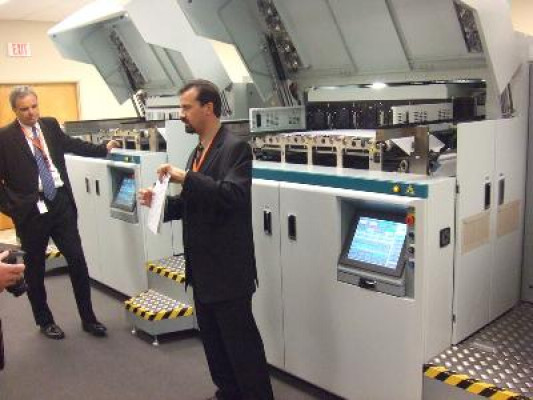 The company’s latest innovation is the introduction of MICR (magnetic ink character recognition) ink-jet capability. Direct Group, an integrated direct marketing solutions provider, has been an early adopter of the technology. It installed two Océ JetStream 2200 systems at its facility in Swedesboro, NJ, the latest including the new optional MICR printing unit.

Direct Group reported having reached full capacity on its first press after only six months of operation, serving clients in the financial services and education sectors. It is looking to extend the capability to applications in the telecommunications, retail, automotive, insurance and nonprofit sectors. 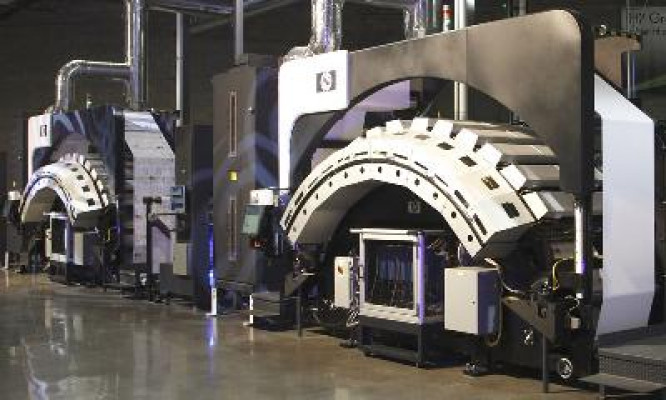 O'Neil Data Systems in Los Angeles was the original beta site for the HP Inkjet Web Press, pictured here at a open house for the facility. Set for commercial release in the second half of 2009, the 30-inch-wide, ink-jet press offers CMYK printing at a 1,200x600 dpi resolution and 400 fpm top speed.

HP has announced plans to offer a coated stock option for the press, in addition to the range of uncoated stocks it supports. Both require application of a bonding agent.

Consolidated Graphics and Courier Corp. have since joined the pilot program and were scheduled to receive presses in the second and fourth quarter of 2009, respectively. The previously announced installation at CPI in France is reportedly still on track for the third quarter, and HP still has a commitment from Taylor Corp. 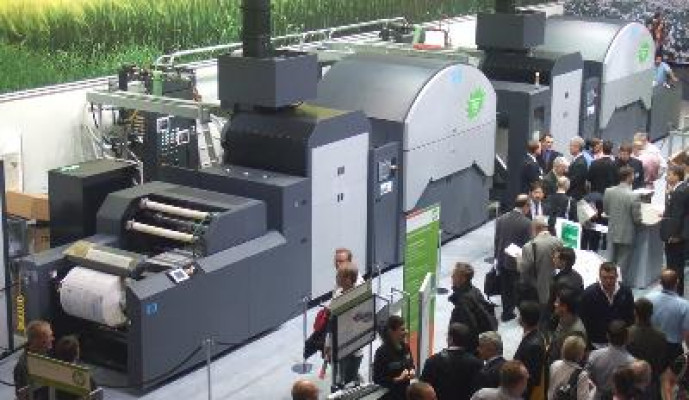 HP showed a 36? version of its Inkjet Web Press at Drupa 2008, but said the first model offered in the thermal drop-on-demand (DOD) inkjet press line will still be a 30? configuration.

The comemrcial version is expected to print a maximu roll width of approximately 20 inches at 600 fpm and 600 dpi, with image quality said to be comparable to 133-175 lpi. The Stream Press lets you use a wide
range of standard inkjet-optimized substrates — including coated and uncoated stocks of different weights (45 to 300 gsm). 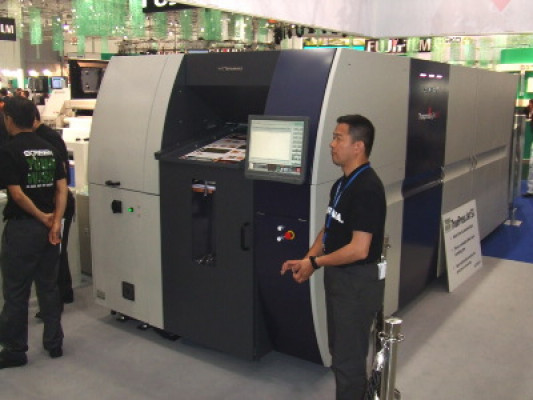 For its technology demonstration at Drupa 2008, Screen allowed people to get up close to its Truepress JetSX color ink-jet press, except at the roped-off delivery end where operators held up select samples “hot off the press” for viewing from a few feet away. A sample sheet was displayed under glass for closer inspection. 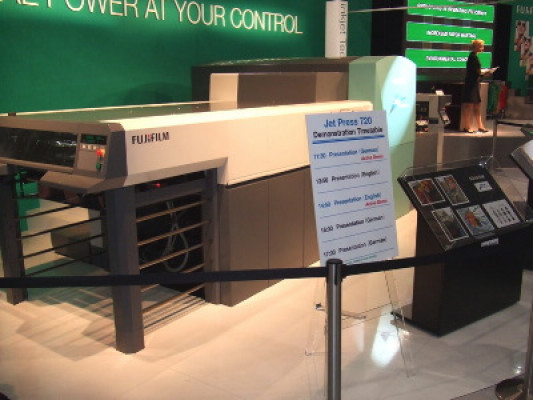 At Drupa 2008, Fujifilm had its Jet Press 720 sheetfed color ink-jet press on stage that was entirely roped off to keep attendees several feet away and the glass-encased print samples were also located behind the barrier.

RISO Inc. established a separate class of entry-level sheetfed ink-jet printers with the introduction of its HC5500 ComColor printer that output 120 ppm. That machine, and its recently introduced successor printer family, are designed to produce what the company characterizes as “communication color” quality.

The five models in the new ComColor series of four-color ink-jet printer/MFPs feature maximum print speeds of 90 to 150 ppm (A4 size). They employ the company's FORCEJET imaging system and piezo drop-on-demand (DOD) ink-jet technology. These machines are rated for a duty cycle of 500,000 pages/month. 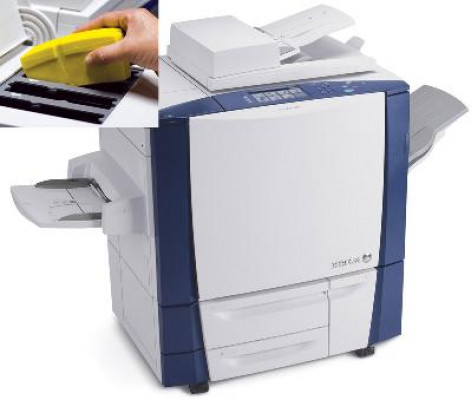 Xerox Corp.’s position in the production ink-jet printing segment is still to be determined. The company has said it intends to compete in the market “when the time is right” and that it will not duplicate existing technology, but offer a solution with “superior image quality on a wide array of substrates.”

What it showed at Drupa 2008 was a technology demonstration of “cured gel ink” that converts into a liquid in the print head. It is the consistency of peanut butter when it hits the substrate, where it is hardened by a pulse of UV light.

In May of 2009, the company introduced the ColorQube 9200 Series multifunction printer that use Xerox’ proprietary solid-ink technology, which is said to cut the cost of color pages by up to 62% compared to traditional color lasers. The series is available in three models with maximum printing speeds of 38 to 85 ppm.

Xerox has said it is looking to move up market into the production printing arena with this solid-ink technology.
0 Comments
END_OF_DOCUMENT_TOKEN_TO_BE_REPLACED
Related Content