Xerox Provides Breath of Life in Project to Co-Manufacture Ventilators 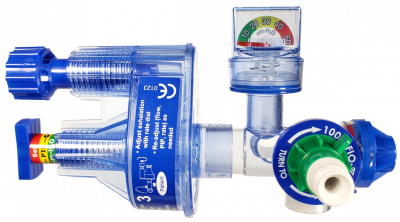 No life-saving tool in the fight against COVID-19 is more sought after than the ventilator, the machine that breathes for those whose virus-stricken lungs can’t aspirate on their own. In the pandemic’s hot spots, appeals for more ventilators have surpassed demand for almost every other type of resource.

In Sacramento, Calif., a supplier called Vortran Medical Technology has an answer in its GO2Vent ventilator: not an ICU-level breathing device, but a modified, single-use version that lets hospitals reserve their high-end equipment for the crisis situations where they’re needed most. Wishing to scale up production as rapidly as possible, Vortran enlisted the help of a manufacturing partner in Webster, N.Y., with virtually no experience in building the kinds of medical devices in which Vortran specializes.

This seems counterintuitive only until it’s revealed that the partner is Xerox, and that the two companies’ precision manufacturing techniques are in fact closely matched. Mary Gale Fromm, VP of manufacturing at the Xerox plant where the GO2Vent units will be made, says the compatibility with Vortran enables “cloning their operations, but hyper-scaling them in our location.”

“Hyper-scaling” means turning out as many as one million GO2Vent ventilators in the months ahead, with Xerox delivering up to two-thirds of the total. Fromm says the plant expects to commence production of devices early this month and then progress to “a very mature level of output” by June.

Home of the iGen

They’ll be made in the same factory that assembles Xerox’s iGen production presses, its Baltoro inkjet systems, and other printing hardware. Fromm points out that in this high-volume setting, producing and selling one machine like an iGen drives the manufacture and sale of millions of toner units and spare parts – a scale on which Xerox is used to operating, and one to which it should be able to ramp up quickly for making the GO2Vent.

In the Webster plant, Xerox is setting up manufacturing cells that Fromm says are “super-aligned” to Vortran’s requirements for building and testing the device. She notes that as a maker of parts for digital presses, Xerox has all the expertise in the manufacture of precision components that the partnership calls for.

The project breaks new ground for Xerox in that ventilators are regulated by the Food and Drug Administration, a federal agency whose rules don’t apply to anything in the company’s regular product line. But Fromm says that after transposing Vortran’s protocols for validating the GO2Vent units to the Webster plant, her team found that “none of the tests are super-unfamiliar to us.”

There’s also the fact that Vortran’s and Xerox’s respective ISO certifications for quality management in manufacturing are similar – so much so, according to Fromm, that they’re essentially “variations on a theme.” Overall, she says, “there’s a tremendous amount of commonality” in the way each partner will approach the task.

What they aim to produce in batches of up to 200,000 units per month is a hospital-grade, FDA-approved ventilator that has been in use for 20 years by hospitals, local, state, and national governments, and other emergency health providers. Gas-operated from a compressor or an oxygen/air supply, the disposable GO2Vent is designed to support patients who do not need or can be taken off ICU-level breathing devices.

In this way, GO2Vent helps medical professionals alleviate shortages of critically needed ICU ventilators. Accompanying it, and also to be manufactured by Xerox, is the APM-Plus, a battery-operated device that, when connected to a GO2Vent unit, monitors respiration rates and other patient ventilation parameters.

A Challenge from the CEO

As Fromm recounts it, the Xerox - Vortran partnership came about both strategically and serendipitously. In February, she says, Xerox CEO John Visentin challenged the company to find ways of helping those fighting the pandemic on the front lines. She says this prompted her division to look closely at how its manufacturing capability could be brought to bear in the effort.

Contacts at the nearby Rochester Institute of Technology and University of Rochester Medical Center advised Xerox of the ventilator shortage and of the fact that Vortran was looking for help in manufacturing the devices. Personnel at Xerox’s famous PARC innovation headquarters in Palo Alto, Calif., had also heard about Vortran, adding to what Fromm says was “fertile ground” for cooperation between the two companies.

The joint venture will be as open-ended as the emergency situation it is dealing with. “As long as there is a demand for the devices, we will continue to produce them” as Vortran’s exclusive co-manufacturer of the GO2Vent, Fromm says.

Ventilators haven’t been Xerox’s only contribution to the arsenal of anti-COVID-19 systems and supplies. The company has also committed to producing 140,000 gallons of hand sanitizer at facilities in Rochester and Toronto. In partnership with men’s fashion brand Hickey Freeman, Xerox has turned material for digital press filters into 10,000 medical-grade masks for health care workers at Rochester Regional Hospital.

Fromm observes that these efforts are in keeping with Xerox’s long history of helping to solve some of society’s most vexing problems. If it “makes life inefficient” – to say nothing of threatening life itself – it is a challenge that Xerox will want to rise to, she declares.