Not only is ADP misleading its stakeholders, its marketing strategy to paper industry customers is somewhat confusing!

A few months ago, we started highlighting the “Top Five Greenwashers” in North America — corporations that are misleading their customers on the environmental profile of paper and print, while failing to consider the impacts of their own electronic infrastructure, and ignoring the sustainability of paper products from well-managed North American forests.

All of the companies chosen for our Top Five list have received at least two letters from Two Sides, and have either not responded or refused to address our concerns. Our letters detail which of the company’s claims may be misleading, providing extensive independent sourcing and substantiation for our case, and inviting the company to make necessary changes.

ADP is a well-established global provider of payroll and other human resource services with operations in over 10 countries. Many companies in the paper, print and packaging sectors, including Two Sides member companies, use ADP’s services.

We sent ADP a first letter in February 2016 with clear and reasonable requests for modifications to their message. We asked that the company focus its messaging on the convenience and practicality of online transactions rather than rely on vague and unsubstantiated environmental claims that fall short of the Green Guides published by the U.S. Federal Trade Commission.

In May 2016, ADP replied to our initial letter, holding to flawed claims while failing to provide any substantiating facts, or any evidence that they had ever examined the relative environmental impacts of paper versus electronic life cycles. Have a look at their letter here.

In October 2016, we sent them a second letter with additional problematic claims reported to us by members who rely on print and paper for their livelihood (see below). Again we asked ADP in good faith to make empirically grounded modifications. They refused, and failed to respond to our letter or return follow-up calls. ADP’s false claims are especially concerning since they sell their services to the paper industry. 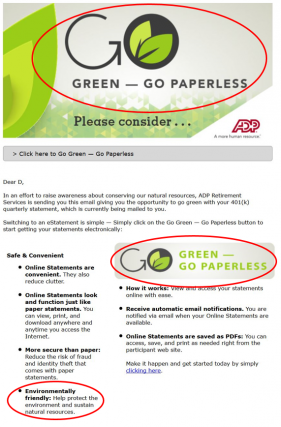 Remove all references to “go green.”

Modify the message to refer to e-billing, online statements, online payroll instead of “paperless.”

For a detailed explanation of why claims like this are false and mislead customers, see our Fact Sheet on this topic.

Leading Fortune 100 companies have been collaborating with us for the past five years, and over 75 corporations have now removed misleading claims related to print and paper. Chief marketing officers and chief sustainability officers from Starbucks, Wells Fargo, Bank of America, Citibank, US Bank, Macy’s and many others are making changes. Why isn’t ADP?

END_OF_DOCUMENT_TOKEN_TO_BE_REPLACED
Subscribe
Upcoming Webinars
Inkjet: It is Here and Now