Close but no cigar. My Minnesota Vikings came within one game of playing the Super Bowl in their home stadium. It seemed as it was destiny as in the divisional playoff game the "Minneapolis Miracle" occurred when, with 10 seconds left in the game and trailing by one, the Vikings completed a 61-yard pass for the win over the Saints as time expired. However, the euphoria of a last-second win versus the memories of many last-second losses only lasted one week as they were thoroughly trounced by the Eagles in the NFC Championship game. Oh what fun it could have been to play the Super Bowl at home.

The economic impact of the Super Bowl on local businesses is forecast by Rocket Analytics LLC to be $338 million. Of that, $268 million will be spent by visitors on retail shopping, hotels, food & beverage, rental cars, entertainment and ground transportation. But that still leaves $70 million for a wide variety of services needed to support the game, including creating graphics for the venues, and printing programs, signs, flyers, etc.

Supporting the graphics and printing needs of events is big business for a number of print service providers.

Here are a few examples:

For over 20 years Quad/Graphics has printed the Super Bowl program as part of a contract with H.O. Zimman. Talk about a rush job; the program is printed within 24 hours of the completion of the two conference championship games. Last year’s program was 292 pages. Of the 290 pages - not counting the cover or back cover - about half of them are full-page ads. The rest is laid out in their page design program by one person. Everyone on the production crew at Quad/Graphics, plus the staff members from H.O. Zimman, watch each conference championship game on TV to see how the games are unfolding. They’re building pages as the games are unfolding. Getting the equipment, templates and other pieces to the puzzle begins Saturday night and into Sunday morning - game day.

Stories are written immediately as the conference championship games end. The file then goes into production and programs for the SUper Bowl are coming out of the bindery on Sunday night. Several trucks are waiting at the loading dock to take the books to their destinations. (Source - Nicholas Dettmann/Daily News)

Game program for the 2017 Super Bowl.

While the printing of programs is clearly time-sensitive, there are lots of other printing jobs going on throughout the days leading up the big game. Companies like Creative Graphic Services (CGS) and Vomela are heavy into the graphics for the event. For over 25 years, CGS has produced graphics, large and small, to support a variety of events, including the NFL Experience, pro football’s interactive theme park, the NFL Tailgate Party and many other sponsor parties. For Super Bowl 50 they provided 4,125 graphics, resulting in over four miles of printing. 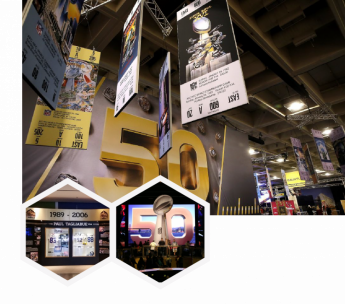 And the Volema Companies, a St. Paul, Minn., company that prints graphics solutions for major sporting venues and events all over the country, is an official in-kind partner of the Super Bowl LII Host Committee. They produced a variety of graphics in and around the recently constructed U.S. Bank Stadium. Vomela also collaborated with other sponsors to create vibrant graphics for the big event.

More graphics for the Super Bowl.

And the NFL has a program called the NFL’s Super Bowl LII Business Connect Program, which serves as a conduit for qualified, diverse businesses in Super Bowl host cities. Wallace Carlson Printing (Minnetonka, Minn.) is one of 45 Minnesota companies, and the only provider of commercial printing and packaging solutions, selected as a “Premier Partner.” Wallace Carlson has already been working with the Super Bowl LII Host Committee and the NFL in the printing of the "Business Connect Showcase Guide" and the "Business Connect Resource Guide," which are provided to NFL contractors and event producers. And, as the only Premier Partner, they were well-positioned for additional printing jobs.

So, even though the Vikings didn’t make it to the big game this year, there are a large number of Minnesota companies, including a handful of printers, that will be enjoying the extra business. Skol!