Sticky Discipline for the Label Business – May 2016 M&A Activity 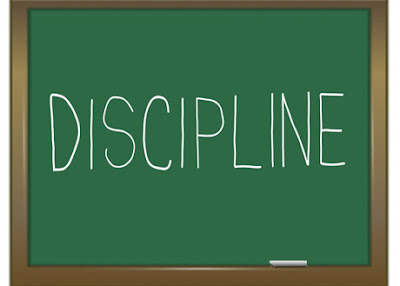 CCL Industries has proven to be an adept and disciplined serial acquirer of relatively small bolt-on transactions for its label and Avery divisions. The company announced another acquisition in the label printing segment, acquiring Eukerdruck and Pharma Druck, two German companies with common ownership. The acquired companies produce inserts, booklets and pressure sensitive labels for pharmaceutical companies in German-speaking Europe. The transaction valued the acquired companies and related real estate at $31 million including assumed debt. The reported sales of the combined companies were $40 million with a respectable 14.0% adjusted EBITDA of $5.6 million. CCL paid the sellers a multiple of 5.54 times adjusted EBITDA, absolutely consistent with the pricing range CCL has established for its acquisitions in the label segment.

CCL appears to be strategically focused on establishing beachheads internationally, no matter that many of these transactions are rather small relative to CCL’s $3 billion in annual revenue; most representing less than 1% in additional revenue. Notably, in addition to maintaining deal discipline in these smaller deals, CCL paid a still moderate, at least in terms of current market multiples for larger enterprise-level transactions, 6.7 times EBITDA when acquiring Checkpoint Systems this past March. That acquisition establishes an entirely new division within CCL Industries, bringing apparel and retail labeling solutions into the mix at CCL, including “smart label” RFID labeling technologies. 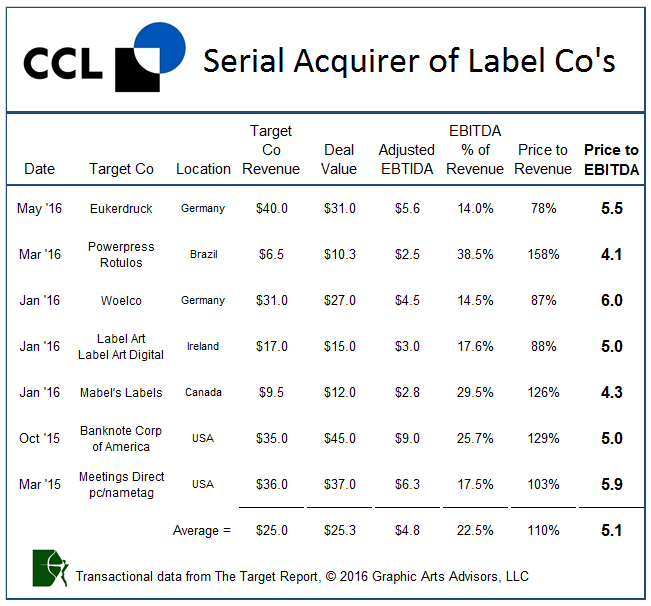 Pfingsten Partners, in concert with printing and paper industry veteran executive Brian Dunsirn, acquired Cleveland area Oliver Printing. Privately held and family-managed for four generations, Oliver Printing has successfully transitioned from a purely commercial printer to a company with a focus on folding cartons, including structural design, printing and finishing. As the first institutional owner of Oliver Printing, Pfingsten is positioning Oliver as its platform for additional investments and bolt-on acquisitions within the packaging industry.

At the other end of the strategic spectrum from commercial printing companies that have successfully added packaging to their services, are companies such as Strata in Plymouth Meeting, Pennsylvania that provides diverse marketing services. Strata acquired additional printing and direct mail capacity with the acquisition of Movad Corporation.

Integ, located in Waco, Texas, has used acquisition as a primary driver of its growth and evolution into a diversified marketing services provider, acquiring several mailing and printing companies along the way. It’s latest acquisition, Davis Brothers, brings with it significant sheetfed printing capacity as well as newsprint web offset presses.

In yet another approach to differentiation, Rayacom Print & Design, headquartered in Edmonton, Alberta, continued its geographic diversification and acquired the assets of Generation Printing in Vancouver, British Columbia. Rayacom now has eleven locations, mostly spread across central and western Canada, with one location in Toronto to the east.

Kappa Media added to its portfolio of printing companies with another acquisition following its recent purchase last month of Vanguard Printing in Ithaca, New York (see The Target Report – April 2016 for more about Kappa and its founder). The latest addition for Kappa was the purchase of Times Printing in Random Lakes, Wisconsin. Both Vanguard and Times Printing specialize in publication printing services.

The churning goes on in the paper making industry. A group of PE funds that comprise the principal shareholders of Catalyst Paper teamed up with Kejriwal Group International, a paper and pulp processing company based in Mumbai, India, in a bid to take Catalyst Paper private. Catalyst currently owns and operates five mills in North America, producing printing papers ranging from uncoated newsprint up to the finer grade coated sheets.

Dex Media, the successor to a long line of phone directory publishing and printing companies, failed to meet the goals set forth as it emerged from its second bankruptcy filing in 2013 ((see The Target Report – August 2012 and The Target Report – March 2013). The company and its many related entities that are the remnants from the 2013 merger between Dex One Corp (aka RH Donnelley) and SuperMedia (aka Idearc Media, né Verizon Directories) filed for Chapter 11 for the third time on May 16th. In the turnaround profession, they call that a “Chapter 33” – need we say more about the prospects for directory-based print-centric businesses that compete in the face of Google and other online search options?

Sponsor Content Innovations on the Perfector for the XL 106 Press