Technology Trends from the InfoBlog
May 25, 2017

On Thursday May 11, around 150 Konica Minolta production print users gathered in Vienna for a day of presentations at the inaugural meeting of PROKOM, the Konica Minolta user community. Targeted at production users, PROKOM is part of a Konica Minolta customer-centric strategy intended to drive the move from analog to digital print processes. With the focus, at least at first, on users of cut-sheet light to mid-production color and black & white digital print, the opportunity for PROKOM is unlike many other user groups, which tend to focus on higher levels of production.

The journey toward PROKOM began over a decade ago when Konica Minolta began actively targeting users in production environments. A key date for this was drupa in 2004, the first production event at which a combined Konica Minolta exhibited. Today, Konica Minolta has a sizable presence in production and expects to continue that move with product rollouts like its KM-1 B2-format production digital printer. This Konica Minolta movement to production is illustrated by a statement made by a Konica Minolta U.S. executive at the event who reported that production & industrial print accounts for 25% of its North American placements. With a strategy that includes such a production focus, it is not a surprise that Konica Minolta would want to help build a user community to educate and support this segment.

Speakers at the event included: 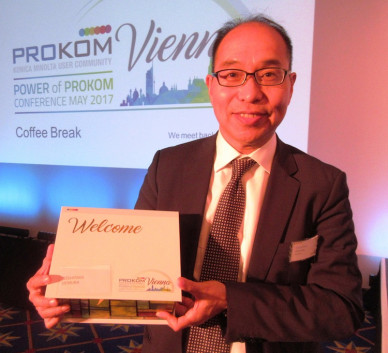 Toshi Uemura of Konica Minolta with the box for the PROKOM welcome package.

Toshi Uemura will represent Konica Minolta on the PROKOM board. Neil Falconer and Richard Gray of PrintFuture are also involved in promoting the PROKOM initiative.

Other items of note from the event: 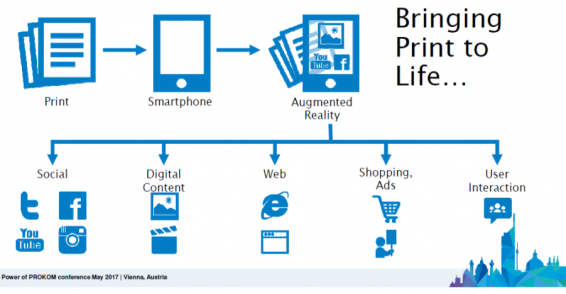 The organizers report that PROKOM has drawn about 700 members so far from 20 countries around the world. Begun as a European initiative, four of the five Konica Minolta users on the PROKOM board are from European countries. The next meeting will take place in Budapest, Hungary in June of 2018. Expansion into the United States is expected soon. A lunch & learn is planned at Print in September. A U.S. PROKOM event will follow sometime in 2018. There are currently no plans for expanding PROKOM to Asia Pacific or other regions, though that could happen over time.

To become a PROKOM member you must own a Konica Minolta product (and have the serial number) to be eligible for the free and elite membership levels. The elite membership, which provides greater access to web-based materials like the new e-learning courses, requires an annual fee (approximately $500). For more information see www.prokom.org.