Grit. How to Get it. 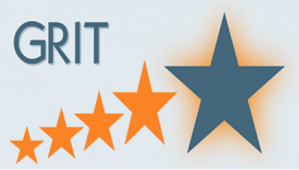 It’s a shame that the Olympics are only held every two years, because every day the games are broadcast, there is a story and a lesson for us all. You don’t have to be athletic, or even interested in sports, to be inspired by these young competitors and their stories of “grit."

Take for example, 18-year-old swimmer Yusra Mardini. While she didn’t make the finals in her events, she made it to the Olympics alive.  She was a member of the refugee team.  When the motor stopped on the dinghy in which she and 20 others were in while fleeing the civil war in Syria, she and her sister realized they were among the only ones who knew how to swim. They pushed the boat for three hours in the cold water and in the dark to shore for what was the first of a 25-day trek to refuge in Berlin where she joined a swim club.  She swims now to inspire others and give hope more than to win a medal. That’s a story of grit.

And USA runner Boris Berian has grit. He was a track star in high school and college, until he had to drop out due to his grades and his financial situation. While he could have easily given up, he didn’t.  He kept running on his own until he was taken in by a local track club where he continued to work on his passion and skills.

Angela Duckworth has written a New York Times Best Seller “Grit."   I love this book because she has applied scientific research to conclude that the biggest indicator of success is not talent, but rather the combination of perseverance and passion, known as grit.  As we learn about the stories of perseverance and passion that have gotten these athletes to the Olympic stage, we are provided a consistent source of motivation, inspiration and determination to get after the goals we have both personally and professionally.

You may already have a high level of grit, but if you don’t, the good news is that anyone can develop grit, according to Duckworth.  It takes these four things:

Butler Street helps companies and their people grow.  We recognize grit and the opportunities to help cultivate grit within your organization.  Whether it’s connecting people to purpose or creating opportunities for deliberate practice, we can help.  We’ve seen grit and it’s pretty awesome — on and off the Olympic stage.

Leave a comment below!  We’d love to hear your stories of grit, and how you got it.

Mary Ann McLaughlin serves as a Managing Partner at Butler Street, a leading management consulting, training and research firm that focuses on client and talent development. Prior to Butler Street, she served in executive roles for 13 years including chief operating officer, president and managing director. A Six Sigma Champion certified executive, McLaughlin leverages her robust process background with 32 years of sales and operational experience.

END_OF_DOCUMENT_TOKEN_TO_BE_REPLACED
Subscribe
Upcoming Webinars
Inkjet: It is Here and Now