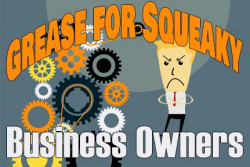 “The wheel that squeaks the loudest is the one that gets the grease,” says an old adage. That may work for wheels, but not so much in business. For example, squeaky business owners risk being ignored over time.

Fact is, people tune out continuous noises, like airplane flyovers and clicking clocks, after a short period. How do I know?

When our former printing business moved into a new facility located near an airport, the plane flyovers were annoying at first. However, after a month in our new building, we no longer even noticed the plane noise. Because, the human brain just tunes out certain continual noises.

In other words, angry outbursts, along with empty words of nothingness from business owners, simply go unheeded after a time.

To be fair, many business owners don’t really know how to stop stupid mistakes, much less miscommunication that causes disorder in their company.

Story About a Squeaky Business Owner

I worked as a young apprentice from 1967 to 1969 at a place called Kennedy Print Shop, one of the last letterpress shops in Louisiana. Not surprisingly, I was increasingly distracted, thinking about playing music on weekends and becoming a big rock star. Almost did!

One hot summer day, with little air conditioning in the old shop, I started printing an order of 10,000 No. 10 envelopes. For some reason, I couldn’t get the old press operating correctly. Unfortunately, I just kept wasting and ruining envelope after envelope. In fact, lying all around me were thousands of them. Stupidly, I didn’t have the sense to throw the ruined envelopes in the trash. Making the matter worse!

With ruined envelopes flying out of the press and hitting the floor, my boss, Mr. Williamson, walked out of his office toward me. I nervously stopped the press, and looked sheepishly at my boss, whose face was now beet red. He exploded.

“What the blankly blank do you think you’re doing?” His tirade went on what seemed like twenty minutes.

In truth, I deserved his hard-hitting reprimand. Well, maybe not that hard! Eventually, he calmed down, and I tried much harder from then on not to repeat dumb mistakes. However, after a few days like the other employees, it was back to “business as usual,” whereby, tuning out Mr. Williamson.

Consequently, mistakes continued to happen, and so did Mr. Williamson’s rather loud squeaks!

For the record, Mr. Williamson is one of my heroes; a hard-working businessman that I think about often.

Consequently, Quality Assurance, back in those days, amounted to a foreman or boss chewing out someone’s butt when mistakes happened. It was their way of assuring that an employee focused on their job, and not on being the next Steppenwolf.

To be sure, quality systems will grease the wheels of squeaking business owners and keep temper tantrums to a minimum.

Did I mention? Great systems work … with a little greasing!

The Power of Print for Business Reopenings

Print in the Eye of the Buyer

News Corp to Close Its Printing Plant in the Bronx

Hear from a print service provider whose partnership with an in-plant keeps both operations in business during emergencies.

In this webinar, you will learn how COVID-19 has led to a resurgence of packaging production in North America.

This webinar will feature a panel discussion with a selection of some of North America’s top corrugated packaging innovators.

Learn More
Print in the Eye of the Buyer

Attend this webinar and find out how to meet the needs of today’s print customers.