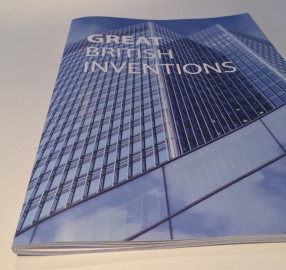 A finished "square back" book produced
by the Watkiss PowerSquare 244 bookletmaker.

Well, I've put another "drupa notch" on my belt, and it was quite an experience. The weather in Düsseldorf was good, and the crowds were there. For those who have never been, the sheer size of the show, and the enormous investment by the hundreds of firms exhibiting are truly mind-boggling. Deals were done, and many were for multiple high-priced systems, putting lots of smiles on vendor salespeople and management.

More than ever, advanced technology ruled, with the various (and many) inkjet printing manufacturers demonstrating how far their technology has come. Offset was certainly in attendance, but not as a star player. More importantly, finishing was highlighted as never before. Although finishing vendors were scattered throughout the complex, Hall 6 was the epicenter of the finishing world here. With the digital workflow using less labor than its offset counterpart, the push is on to automate finishing as far as one can to reduce overall manning and eliminate separate operations.

While inkjet press vendors tended to prefer a near-line finishing approach in the past, more and more are coming around to inline. Kodak showed multiple inline finishing options on its Prosper 6000C. VITS International partnered with Kodak to show a synchronized multi-web sheeter finishing solution that combined digital web output with offset. Kodak could also switch the press output to a combined Manroland and RIMA System fold line running at 1,000 feet-per-minute. This module produced full variable eight-page finished catalogs in different languages, and micro-zoned for targeted distribution.

The book world continued to merit special attention in finishing. Short-run digital book printing has encouraged the development of many Web-to-book-block systems. Hunkeler, Tecnau, Kolbus and others were all showing Web-to-book block system which could produce high-quality "books-of-one" blocks. Typically, the book block is pre-glued to keep it together during manual or automatic placement into the perfect binder. These systems have the ability to change book block sizes in a matter of seconds to accommodate short runs of various formats.

The cut-sheet digital segment did not lack attention either, with new inline finishing modules from a wide variety of vendors. Watkiss showed a new (up to) 244-page "PowerSquare" booklet finishing module designed for the iGen which could could produce a high-quality "square-back" book at the end of the printer. C.P. Bourg also showed a complete stitched booklet module designed for connection to a variety of cut-sheet digital printers.

All of these systems are highly-automated, with the goal of using a single operator to produce a finished, saleable product. Hall 6 was indeed "buzzing" with activity, and finishing has finally gained focus as the critical part of the print manufacturing process that it is. We’ll have more on finishing at drupa next week.

Don has worked in technical support, sales, engineering, and management during a career in both the commercial offset and digital finishing sectors. He is the North American representative for IBIS Bindery Systems, Ltd. of The United Kingdom.

END_OF_DOCUMENT_TOKEN_TO_BE_REPLACED
Upcoming Webinars
Print Outlook: What to Expect in the Year Ahead