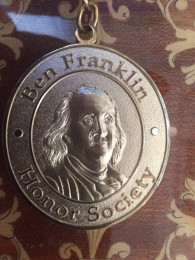 A medal is bestowed upon inductees into the Ben Franklin Honor Society.

As Chair of the Ben Franklin Honor Society (BFHS), I was disappointed to read the recent commentary by Harvey Levenson featured in Printing Impressions that disparages our efforts to address the matter of gender equity and diversity. This is a subject about which our membership is very passionate and has spent a great number of hours debating. Dr. Levenson’s remarks reflect a misrepresentation and mischaracterization of the Society’s events and activities in regard to this matter and I wish to set the record straight.

First off, it is important to emphasize that the Ben Franklin Honor Society is not a registered non-profit organization, but in effect, an honorary club. Our procedures are based on the mutual agreement of our membership. This can often lead to some confusion. Allow me to shed some light on the situation that Dr. Levenson referred to so that you may draw your own conclusions as to how the matter was handled.

In 2017, an amendment was proposed to the 284 BFHS members calling for a wide-spread change to the process in which new members were elected, beginning with the Class of 2018. This proposed Bylaw amendment was sent without the knowledge or consent of the Officers or administrators and mailed to each member directly. The proposed amendment, which was confusing in its presentation, received 44 NO votes and 32 YES votes.  Unfortunately, due to an oddity in the Society’s bylaws, the 208 abstentions were counted as affirmative votes. No other organization I am aware has such a peculiar condition which ultimately rendered the decision misleading.

While the Society recognizes the issue of gender diversity and equity, as well as other concerns, this blunt force approach was not the method in which to enforce it. The Officers immediately took action and completed a months’ long review process from November 2017 to May 2018 on the Society's mission, purpose, and standards. Input was solicited from the membership and 30-member volunteers were divided into teams to evaluate and make recommendations to the Officers on the Society's purpose, bylaws, nomination and selection process, and Annual Meeting format.

Two key takeaways of these Rules of Operation included broadening the definition of eligible graphic communications organizations and activities to be more inclusive and providing a more detailed definition to meritorious service to now include both paid and unpaid service. These takeaways clearly address issues that were impediments to Society membership for a number of previously nominated women and men. They were certainly not intentionally included to prevent women from being named to the Society.

Finally, I want to note that the Ben Franklin Honor Society relies on its current members to nominate prospective new members. It is up to us to be the drivers of this cause and I was hoping for a surge of female candidates this year given the changes made, but alas the numbers were far fewer than expected.

I believe that it is important to maintain the decorum, history and, above-all, the integrity of the Ben Franklin Honor Society. I want any Printing Impressions reader to see our Society as a league of honor and aspire to join our ranks. Lastly, I want to commend the individuals, many of whom were women, who did a remarkable job in putting in place a framework that provides for greater gender diversity in future BFHS membership. I look forward to seeing our membership grow and change just as the graphic communications industry must do as well.

Gerry Nathe is a retired chairman and board member of Baldwin Technology. He is the current chair of the Ben Franklin Honor Society, and a member of the board of the Print & Graphics Scholarship Foundation (PGSF).

Related story: Commentary on Industry Diversity: Why Did I Know This Was Coming?

Gerry Nathe is a retired chairman and board member of Baldwin Technology. He is the current chair of the Ben Franklin Honor Society, and a member of the board of the Print & Graphics Scholarship Foundation (PGSF).

Is TikTok Right For Your Printing Business?

This webinar will consider the benefits of continuous-feed inkjet, including its ability to bring new work into your operation.