Alabama Football - Getting The Process Right 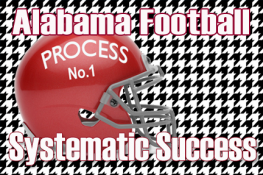 I grew up in Baton Rouge, Louisiana, where our family was big LSU fans. One of the boys in our church, Duane Leopard, played right tackle for LSU, along with Heisman-winning running back, Billy Cannon. That team went on to win a national championship in 1958. When I was about 11 and 12 years old, my brother Billy and I sold soft drinks at LSU stadium and got to watch many LSU home games.

One of the games I loved to watch the most was the LSU Tigers versus the Alabama “Crimson Tide.” At that time, Alabama was coached by the legendary Paul “Bear” Bryant. Even as a young kid I noticed that Alabama seemed to be more regimented in their approach to the game than other teams. Like when they would break the huddle, they always came up to the line and clapped in unison, in sort of a military type fashion. I liked that!

I guess that’s why I was intrigued as Alabama began winning big again over the past 10 years. It started when Nick Saban left LSU after winning a National Championship at LSU in 2003. He did a short stint in the NFL, and then joined the Alabama Crimson Tide in 2007.

If you are a college football fan, like me, by now you’ve probably heard about Nick Saban’s mantra, when ask why his team is so successful. “It’s a Process!” says Saban. According to interviews of some of his former players, he preached “The Process,” over and over. In fact, they said, “We all started saying it, ad nauseam!”

As a systems nerd myself, ole Nick is someone I can relate to and admire, even though I’m now a Tennessee resident and VOLS fan. However, I must admit, I do get a little tired of Alabama kicking our backsides!

Where did “The Process” begin for Nick Saban?
In his fourth year with Michigan State, the Spartans had four wins and four losses, and in just a few days were scheduled to play undefeated Ohio State, the No. 1 team in the nation at that time. Recalling the lessons of his father, Nick Saban Sr., he decided to try something different in practice that particular week.

He told his players not to worry about winning the game, or watching the scoreboard. Instead, he instructed them to treat each play as if it was a “game” and to focus on what needed to be accomplished during that play (that “game”), to be successful. As soon as the whistle blew to stop each play, it was to be wiped from a player’s memory, because all that mattered was the NEXT play. Coach Saban wanted them to stay focused on what steps needed to be accomplished to win THAT play.

During the week of practice, Saban noticed that his players seemed more confident and were as crisp as they'd been all season. As a 24-point underdog, the Michigan State Spartans went into Columbus, Ohio on November 7, 1998 and upset the No. 1 Buckeyes, 28-24.

A new component of Nick Saban’s “Process” was born.

What does “The Process” have to do with Systemic Success? Read on ...

To be the best, or to compete at a high level in business, you need to be consistent and continually improve in every aspect of business. Like Alabama, that means every practice, every play, every training session, and meeting—every time! NOTHING should be left to chance.

A “system” or “process” needs to be implemented, in order to be consistent!

A SYSTEM is a group or team of sub-systems or processes that interact, work together, to form the whole.

The term I like is, “A Symphony Of Order,” where you are the Conductor, waving your baton, setting the goals for a great concert ... a great business ... even a great football game.

Did I mention? Great systems or processes work!

END_OF_DOCUMENT_TOKEN_TO_BE_REPLACED
Subscribe
Upcoming Webinars
Inkjet: It is Here and Now