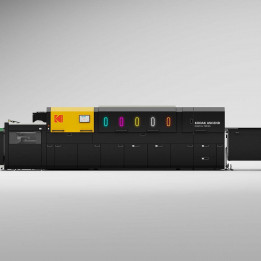 KODAK ASCEND Digital Press, the latest innovation in Kodak’s press portfolio, is designed to open new markets and capabilities that no other cutsheet small-format digital press has been able to offer. The electrophotographic press can print on thicker stocks and produce a range of high-value embellishments in a single pass, making it the most capable presses in its category.

With production speeds at nearly twice that of comparable flatbed inkjet, coming in at 5,280 feet per hour, KODAK ASCEND Digital Press is the smart solution for those looking to diversify their business, expand capacity, and increase embellishment capabilities. The press can handle a much wider range of applications and get them out the door much faster, bringing the production cost down, boosting profitability per job, and increasing return on investment. In fact, the press is designed to produce as many as four million impressions per month, making it a robust option for any shop. 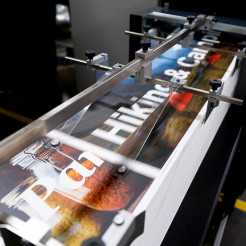 The KODAK ASCEND Press’s sheet-fed design can run packaging weight stocks up to 30 pt (.030) with no slow-down in press time, and maximum reliability.

In addition to the standard imaging units, the press has an additional fifth imaging station that can be easily swapped out to bring a wide range of additional capabilities. There are currently 13 different KODACHROME Dry Ink options for that station ranging from foiling, to various metallics, fluorescent inks, coatings, and more in development. Adding the interchangeable fifth imaging station brings incredible versatility to the ASCEND Press, making it a workhorse that can tackle any application a printer might throw at it.

“To maximize the use of embellishments, we really expanded the CYMK gamut to be the largest possible, with KODACHROME CMYK Dry Inks surpassing 90% of the Pantone library,” says Diego Diaz, professional services manager. “We want to encourage printers to use those additional embellishment options, so we made the KODACHROME CMYK Dry Inks’ gamut as large as possible. That means printers don’t have to use the extra station to hit a special brand color, and that opens up that the 5th station for foil, white, clear, or another high value embellishment.”

The ASCEND Press has a large breadth of applications, such as packaging and blister packs, which previously had to be done with two sheets glued together that now can be created in a single 30-point sheet. “This makes food packaging applications like drink carriers possible that need the structural strength to carry items,” Diaz says. “Specialty trading cards, and even retail signage, that need to be on thicker substrates to stand on their own are now easier to produce.” 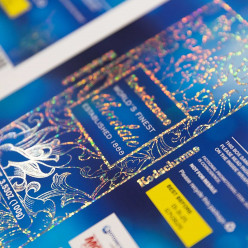 The ASCEND Press can take on some of the work that, traditionally, has gone to wide-format presses. The majority of work that goes to these presses is in the 36-40-inch range, which is why large-format has captured the market for so long. The ASCEND Press creates a new, more efficient option — printers can print on one of the most common signage weights — the .030 stock — in lengths up to 48 inches.

Diaz notes, “I walked into my local outlet of a national sporting goods store, searching for signage and there were more than 1,500 pieces in that one small store. When people think of signage, they think of the big sign in the window, a 3x5-foot piece, but the opportunity goes beyond that. The ASCEND Press is there to compliment wide-format print — to go alongside it. In that sporting goods store, only seven of the 1,500 pieces wouldn’t fit on the ASCEND Press.”

The value of the ASCEND Press is maximizing the efficiency of producing signage with speed, quality, and accuracy. Choosing the right applications to print on the right press can tip the scale of profitability. 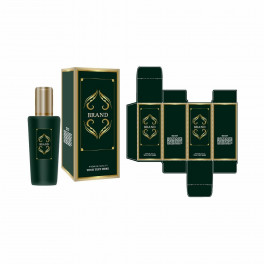 Printers of all types should take a hard look at what they are producing — what are the sizes and substrates that make up the bulk of the work? Most large-format providers will be surprised at how much of that work can go on the ASCEND Press, and moving that work to the faster, higher-quality ASCEND Press means freeing up the wide-format equipment for the truly large jobs, while saving everything from time to ink costs on everything else. The cost of ink alone on the ASCEND Press averages 70-80% less than a large-format printer.

Not Just for Signage

While wide-format printers, especially those producing signage, are certainly one of the markets that would benefit from the ASCEND Press, packaging printers and brands can also see business improvements.  “A lot of packaging printers are being asked by brands to do smaller, shorter runs,” said Diaz. “That’s due in part to the pandemic, along with small business startups and the explosion of e-commerce. In addition, a lot of the larger packaging printers are getting booked up, so smaller prototyping operations are becoming short-run packaging printers. That’s where KODAK ASCEND Digital Press comes into play, by being the packaging solution to help ramp up production.” 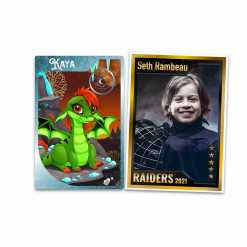 Enable shorter print runs, avoid potential bottlenecks for your large format equipment, and offer a wider range of applications than any other machine on the market.

The ASCEND Press can do true flat foiling in a single pass. The foiling process closely resembles the more traditional foiling and folding methods used for packaging. Many of the new digital foiling solutions in the market use raised-foiling, which doesn’t represent the way a package will actually be foiled in a true production environment. In contrast, the ASCEND Press will match the final production piece. In addition, the use of oil-less KODACHROME Dry Inks allows for higher quality results when folding, creasing, and die-cutting — easily exceeding standard Sutherland rub tests for packaging, and enabling gluing and lamination with standard strength adhesives.

Commercial printers will also benefit from having an ASCEND Press in their operation, especially those looking to branch out into new markets. “We saw diversification during the pandemic — many commercial printers got into packaging, retail, wide-format, and more. The ASCEND Press can help these operations move into these other growing markets and do so on a familiar platform,” says Diaz. If you want to explore higher-margin markets, the ASCEND Press is the perfect option.

The KODAK ASCEND Digital Press will be available in North America and Europe in Q3 of this year.