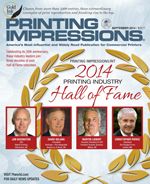 I realize that I’m dating myself, but the 2014 class of Printing Impressions/RIT Printing Industry Hall of Fame honorees, pictured on our cover, marks the 30th year that we’ve been presenting this honor in conjunction with the Rochester Institute of Technology’s School of Media Sciences. That amounts to 120 names—representing a virtual Who’s Who of industry leaders, past and present— inscribed on plaques hanging on a wall at RIT to help inspire future generations of graphic arts professionals.

Bits and Pieces: Define Yourself Via Your Work

OK, we've all reached the eye-rolling stage whenever the term marketing solutions provider is uttered. It's officially garnered "me, too" status in printing circles, largely because there is no cut and dry definition, no accepted group of criteria to be met.

The face of unionization in the United States, and within the printing industry itself, has changed drastically in the last 10 years. Consolidation has taken out many union shops, a trend that is unlikely to change. Membership ranks continue to dwindle, and organizational efforts seem to have become a thing of the past.

Despite numerous challenges associated with the economy, a changing printing landscape and even a natural disaster, David DeLana has grown Heritage—The Integrated Resource in El Reno, OK, to the level of national notoriety. In the process, he has earned his way onto the 2014 Printing Impressions/RIT Printing Industry Hall of Fame induction class.

An international counterfeiting ring, which ran a printing plant in Cherry Hill, NJ, has been given the unofficial distinction of operating the most prolific scam ever perpetrated against U.S. currency. The ring is responsible for producing in excess of $77 million in fake $100 bills since its inception in 1999, including $32 million passed or seized in the U.S. since 2005. Much of it was cranked out in Israel, but this past January, the New Jersey plant was enlisted.

Budington is young in CEO years but, at 45, he has catapulted his way through the ranks at Alexandria, VA-based Global Printing. His forward-thinking, creativity and willingness to embrace change—not to mention his deft guidance of Global Printing through a challenging economy and the industry's paradigm shift—punched Budington's ticket as a 2014 inductee into the Printing Impressions/RIT Printing Industry Hall of Fame, co-sponsored by the Rochester Institute of Technology (RIT) School of Media Sciences.

Marty Liebert, the founder, president and CEO of Freedom Graphic Systems in Milton, WI, has built his direct mail empire from scratch to the $145 million mark in less than 30 years. He dodged a few business bullets in the process, and it has earned him a place among the 2014 Printing Impressions/RIT Printing Industry Hall of Fame induction class.

More Printers Need to Blog to Grow Their Audience: Here's a Step-by-Step Guide

You can use direct mail campaigns and e-mail newsletters. You can post pithy Tweets and upload fun Facebook images. You can have the most gorgeous Website written by the best writer money can buy. But without a good blog you cannot grow your community and your audience.

A northern New Jersey printer has gone to court in its efforts to recover what it feels is just compensation for its insurance claim in the wake of Superstorm Sandy, according to The Record. Pictorial Offset is seeking $37 million for storm-related damage to equipment it claims continues to hamstring its operation, the newspaper said. The printer contends the electronics and electrical systems of several pieces of equipment no longer work properly due to damage from electrical surges during the storm.

Taking Risks is What Earned Chris Pierce, The Dingley Press, a Spot in the Printing Industry Hall of Fame

If you give him points for beginning his professional career somewhat behind the traditional starting line, it's suffice to say that Chris Pierce, chairman of The Dingley Press in Lisbon, ME, has certainly earned his spot in the 2014 Printing Impressions/RIT Printing Industry induction class.

Printing Impressions is proud to present Gold, Silver and Bronze winners of the  2014 Gold Ink Awards, co-sponsored by Canon U.S.A., Fujifilm and Konica Minolta.  More than 1,000 entries were received, encompassing 49 categories. The award- winning companies and their entries will be honored Sept. 29 at the annual  Gold Ink Awards & Hall of Fame Gala held during GRAPH EXPO 14.

The Sales Rep and Sales Manager: Can’t We All Just Get Along?

Take one simple scenario and view it through two different lenses. A sales rep goes out on sales calls. A sales manager sits in the office. Seems simple enough. But the lack of understanding and communication can create a great deal of frustration needlessly. Let's look at it from both sides as each party e-mails in with their perspective.

Top Must See 'ems Winners Are Shown at GRAPH EXPO

The 2014 Must See 'ems winners have been selected and will be on exhibit at GRAPH EXPO 14 and the co-located CPP EXPO show, slated for Sept. 28 to Oct. 1, at Chicago's McCormick Place. Chosen by a panel of industry experts, these innovative technologies represent advances in 11 categories spanning the entire graphic communications industry.