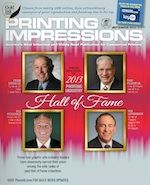 2013 Hall of Fame : Bill Fitzgerald - It Was Love at First Sight

For Bill Fitzgerald, Universal Wilde's partner and CEO, a professional trip from Point A to Point B yielded an eye-opening experience at Point C. While working at a printing firm making Cromalin proofs early in his professional career in 1978, the Massachusetts born and bred Fitzgerald quickly found the mindless job to be the height of tedium. So, when they needed help in the shipping department, the invisible harps began to play.

Standing in the middle of the parking lot, Bob Lothenbach was keenly aware of a few facts. One, he no longer had a job. Two, he didn't have a set of wheels to exit said parking lot; he'd been using a company car. Three, he had $1,800 to his name and, four, it was only Monday. Incredibly, it would turn out to be the greatest day in Bob Lothenbach's professional life.

Freeport Press in Freeport, OH, lays claim to one of the nicest equipment lines in the industry, solid banking relationships with access to capital and an impeccable reputation. The publication and catalog printing operation posted just south of $33 million in sales and is poised to double that amount during the next five years.

Frank Defino Sr., founder and CEO of Tukaiz in Franklin Park, IL, longed to play professional baseball. He shuttled around the left side of the infield, eventually settling on third base. But, Defino soon found something he loved more than baseball...a girl he called Lilly. She would change his life, as would a newspaper ad in January of 1963 that offered a lithographic plate shop that was for sale.

There's good news for a printer located on North Carolina's Outer Banks, courtesy of the Powerball lottery. While she came just one number away from capturing a nine-figure jackpot, Valerie Mason, a resident of Ocracoke Island who owns a commercial printing company, won't brood about her $10,000 windfall.

Sending out a news release, updating your site, and asking all of your reps to tell their customers about a new offering is not enough. Promoting is a process. Be diligent about it and use all of the content channels at your fingertips.

Canon Solutions America hosted its "When Print Meets Multi-Channel" event at SG360°, a direct mail and marketing solutions specialist based in Wheeling, IL. Attendees had the opportunity to learn about digital printing, variable data and multi-channel marketing, and how to monetize them in their own printing operation.

Digitech Image Technologies, a subsidiary of the non-practicing entity Acacia Research, had filed suit in California against EFI and dozens of others, including EFI customers and retailers like Overstock.com and Buy.com, alleging infringement of U.S. Patent No. 6,128,415.

Farquharson/Tedesco on Business Development: Thank You for Hanging Up

Hall of Fame Class Is Epitome of 'Class' –Michelson

Preparing this special issue every year that features our newest class of Printing Impressions/RIT Printing Industry Hall of Fame inductees is very gratifying. As an industry, we often fixate on the numerous challenges that we face. But, the Hall of Fame pays tribute to those who embody the positive traits that make printers a special breed. Now in its 29th year, the Hall of Fame personifies the drive, resiliency, vision and leadership it takes to build and sustain a thriving business.

How many of you are old enough to remember when OSHA introduced the MSDS and Right to Know programs into the American workplace? This was a disruptive time and quite sizable cost to most businesses to adopt this regulation into their workplace and employee introduction of the program details. Here we go again...

While there are many challenges for print service providers as a result of e-media and financial pressures, there are also many new opportunities for those willing to leverage their relationships with their publishing clients through re-defined roles utilizing existing and new skills.