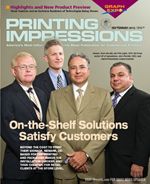 A New Game Plan Pays Off

There are many ways for lithographers to change their business models to promote growth, but there’s one proven approach based on the premise that it’s easier to sell additional services to an existing customer. Adding wide-format digital imaging is one way to add value for existing customers and gain entry to new markets.

Print is still a significant aspect of an integrated marketing package. And that's where Graph Expo can provide its greatest support in the quest to define who you are, as a printer, if this whole "marketing" thing leaves you confused and frustrated. Want to talk marketing? Let's worry about marketing the printer's capabilities first.

Thanks to the vision of a multimedia artist realized through a local Signs By Tomorrow franchise, Color Jam 2012, a 3-D multimedia endeavor, became Chicago's largest-ever public art installation. Bloomingdale Signs By Tomorrow had the honor of implementing more than 70,000 square feet of substrate, of which there were four different types.

Don't Miss Out on a Unique Opportunity –Michelson

With more than 50 seminars, and 48 related conferences, user group meetings and special events, Graph Expo 2012 will provide a great educational and networking opportunity next month. And, that doesn't even factor in the chance to check out all the products shown by 450+ industry suppliers on the McCormick Place South show floor.

Wanting a name that reflects the changing media landscape, the School of Print Media at the Rochester Institute of Technology (RIT) will now be called the School of Media Sciences. Along with the name change, RIT says it is adapting and refining programs to provide emerging professionals with the knowledge and skills necessary to become successful leaders.

Ask 100 salespeople, regardless of what they sell, "What is the hardest part about your job?" and you are likely to hear answers that won't surprise you: Beating voicemail, overcoming the price objection, and managing time. Consider them to be the Sales Triathlon.

A federal appeals court here ruled that Stora Enso North America must face a civil antitrust suit brought by its customers. The case, brought by paper buyers, alleged that executives at Stora Enso's then-U.S. unit engaged in secret meetings with UPM-Kymmene Oyj and conspired to fix publication paper prices during 2002 and 2003, according to the decision

Sure Signs of Success

Foxfire reached the top of its marketplace, nearly doubling its sales to $47 million, by enabling its clients—retail chains including grocery, clothing, pharmaceutical, auto, department and discount stores—to efficiently and effectively execute their signage programs, from data manipulation through installation.

Printers face a number of tradeoffs in selecting presses, ink and paper for production inkjet. This article will explore the challenges and solutions relating to paper in key applications, including transactional and transpromo, book, direct mail and general commercial printing.

The U.S. Postal Service (USPS) ended its third fiscal quarter (April 1 to June 30, 2012) with a net loss of $5.2 billion, compared to a net loss of $3.1 billion for the same period last year. Contributing significantly to the quarter's $5.2 billion loss was $3.1 billion of expense for the legislatively mandated prefunding of retiree health benefits.

Verso Paper announced that, after conducting a comprehensive assessment, it has decided not to reopen its paper mill in Sartell, MN. This decision is based on the length of time that it would take to rebuild the mill structures and systems that were destroyed in the Memorial Day fire and explosion, and the marketplace challenges that investment would present.