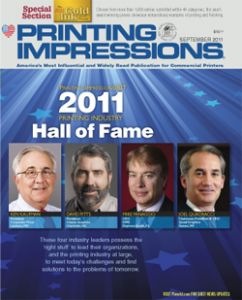 2011 Hall of Fame : David Pitts - With Intellect and Intensity

David Pitts has wielded much influence over the success of Classic Graphics, which opened to $65,000 in overflow work in 1983 and has since catapulted to more than $50 million in sales. “Financial discipline is a big thing for me,” Pitts says.

2011 Hall of Fame : Mike Panaggio - An Entrepreneur at Heart

To call Mike Panaggio a printer would be a largely inaccurate statement, or at least a less descriptive title. The man is an incurable entrepreneur. Panaggio, the CEO of Daytona Beach, FL-based DME, chose printing because he saw an opportunity and pounced on it.

2011 Hall of Fame: Joel Quadracci - The Next Generation

Joel Quadracci may be the luckiest man in the printing industry: the heir apparent in commercial printing’s royal family; the successor to a multibillion-dollar empire hatched through the blood, sweat and tears of his industrious father. Still, heavy is the head that wears the crown.

2011 Hall of Fame: Ken Kaufman - From Publisher to Printer

Ken Kaufman, president of Corporate Press, has made a number of bold and pivotal decisions whenever a choice between A, B and C confronted him. Despite the fact that he had attained an undergraduate degree and earned his masters in a largely unrelated field, Kaufman went about learning the ins and outs of printing from the ground up.

2011 Hall of Famers: In A Class by Themselves –Michelson

Often, it's a fine line that separates the "best" from the rest. Some leaders seem to have an extra gear, able to shift into overdrive when the going gets tough. Others possess an innate sense of timing.

Congress quickly and convincingly pushed through an amendment to the Consumer Product Safety Improvement (CPSIA) Act of 2008 that provides an exemption for children's books and paper-based printed materials. Printing Industries of America lobbied to advocate the industry's position on Capitol Hill.

Fujifilm recently invited about a dozen editors and analysts to its headquarters for a briefing and a please-touch  experience with the J Press 720  that has been dubbed both "disruptive" and a "game changer" by  company executives, the first sheetfed inkjet press in the history of ink on paper.

This summer our humble offices here on Spring Garden Street in Philadelphia welcomed author, CEO and printing industry good guy John Foley, he of Grow Socially fame. I took note because, earlier, Foley had remarked in a post on his Facebook page that he was in Las Vegas for the World Series of Poker (WSOP).

Look no further than the proud-yet-humble postage stamp for a prime example of timeless printing. The stamp is an amazing way to view the world, its history, people and culture, places and events, moments in time and the subtleties of life.

For most salespeople, it has become as routine as a daily commute to arrive at the "Your price is too high" objection. What starts out as a normal sales call with all good intentions ends at a closed road again and again.

The USPS laid down the gauntlet in August, proposing to close as many as 3,700 retail outlets and reducing its staff by as much as 220,000 full-time workers by the year 2015.