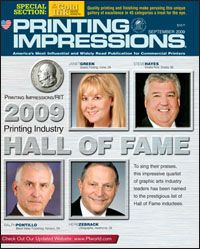 WHAT LESSONS can be gleaned from working at a 150-year-old business? First and foremost, where you've been is not nearly as important as where you're going. Secondly, there is no room for loyalty and tradition when it comes to products and services, which have a tendency to come and go from the business landscape.

SO MANY once-great companies have come and gone during the past four decades, the victims of technological upheaval as the printing industry morphed from letterpress to lithography, single to multicolor presses, sheetfed to web and, most recently, the onslaught of digital output devices.

After getting hammered with a $2.4 billion loss in its most recent quarter and facing a potential overall loss of nearly $7 billion this fiscal year, the United States Postal Service (USPS) is exploring the closure or consolidation of nearly 700 locations nationwide in an effort to right its financial ship.

Tucked inside the picturesque backdrop of the Hudson River in upstate New York, Finch Paper is seeking to show customers and potential clients that it boasts value beyond the mid-cap status it holds among the multitude of U.S. paper providers.

Bankrupt digital printer LaVigne Inc. (LVI) has been purchased by DS Graphics (DSG) of Lowell, MA. Terms of the deal were not revealed, and plans for the combined entity are still in development. The LVI facility will continue to operate at its present location, with CEO Chris Wells remaining on board to lead the integration of client relationships, as well as LVI's sales and service teams.

Joy of the Journey

HOW OFTEN does a 12-year-old have a strong sense of what he/she wants to become in life? Even most 22-year-olds haven't a clue as to what their future holds. Well, Ralph Pontillo knew. Roughly 46 years ago, he stepped into a printing shop as a seventh grader and found his destiny staring right back at him. Call it focus, call it motivation, call it determination. It doesn't matter.

ColorQuick LLC has filed suit against both Hamilton, Bermuda-based VistaPrint and OfficeMax Inc. of Naperville, IL, claiming the companies have infringed upon a ColorQuick patent. According to Mass High Tech: The Journal of New England Technology, the suit was filed in U.S. District Court for East Texas.

THE U.S. economy has had a massive heart attack spanning four quarters. But the printing industry has had far worse heart failure coupled with kidney stones, gall stones, ulcers and a recuperation that will take maybe 36 months. It's always that way. The economy sneezes and printing has double pneumonia.

Quest to Be the Best

THE TERM "wake-up call" generally refers to a heightening of one's awareness to a situation that needs to be rectified. Herb Zebrack is living proof that the term can carry dual meanings, including a literal application. This story traces back some 50 years, when Zebrack was a teenager attending L.A.

The publishers of National Geographic have teamed up with Consolidated Graphics (CGX) and its HP Indigo digital printing capabilities to put a personal touch on their storied magazine.

BROTHERS OMAR Rodriguez and Hugo Cervantes, owners of East Los Angeles-based X-Igent Printing, know a thing or two about starting a commercial printing business from the ground up. When the shop they were working for was acquired by a new owner, they decided to cash in $70,000 of the equity in a home they purchased in 2000 to launch their own brokerage, turned printing operation, in 2001.

HAVE YOU read "The Chaos Scenario" yet? It is written by Ad Age's Bob Garfield. If not, you should. Order it from Amazon, or download it to your Kindle like I did (the printed book became available August 1 for ordering on Amazon; it was available in the Kindle version quite some time before that).…

IN A SENSE, Janet Green could be described as a drama queen. But fate has cast her as a printing kingpin. The CEO of Irvine, CA-based Greens Printing longed to be a star of stage and screen. So destined for an acting career was Green that upon graduating high school, she already had numerous credits in stage, musical theater and television commercials.

Transcontinental Inc. has ordered four triple-wide versions of the Commander CT newspaper web press from Koenig & Bauer AG (KBA) for plants in Toronto, Calgary and Vancouver. The four presses will have a total of 16 towers, four single and two double folders, and six heatset dryers. Installation of all four presses will start in the first quarter of 2010.

ONLY IN A printer's wildest  dreams would it imagine being so good at its craft that Fortune 500 clients would request that it build another facility, in another part of the country, because those clients were relocating there. This scenario is reality for the three divisions that comprise The Goodway Group of Companies, headquartered in Jenkintown, PA.

Sponsored Content Is Print Retargeting for You?
END_OF_DOCUMENT_TOKEN_TO_BE_REPLACED
The Printing Impressions 400