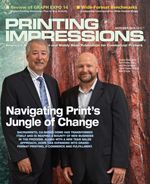 Best Workplaces: No Place I'd Rather Work...

Instead of devising our own wholly subjective criteria with which to judge printing companies, we have instead deferred to the wisdom of the Printing Industries of America (PIA), which produces its own annual Best Workplace in the Americas Awards. The selected companies are: Midstates Inc., Aberdeen, SD; The John Roberts Co., Minneapolis; Ripon Printers, Ripon, WI; and Courier Corp., North Chelmsford, MA.

If there's one thing that printers pride themselves on when it comes to their employee base, it's having a staff that boasts an average of 10-15 years or more. That tells the printer's customers that this company takes care of its people.

Mike Kaufman, president of Linden, NJ-based Cox Printers, has taken his company, literally, to new heights to differentiate itself from an environmental standpoint. Cox Printers' energy use is partially powered by two wind turbines and a 36 kW solar panel system housed on its roof.

Dome, Setting a Torrid Pace in Sacramento, CA, With an Augmented Set of Offerings

In the past two years alone, Dome, a Sacramento, CA-based, full-service printer, has transformed itself through a new wave of products and services, while fundamentally adjusting its approach to the market and adding critical, new gear in the process. The company expects to reach the $50 million sales plateau by 2017, a bullish outlook for an enterprise that currently reaps $32 million in annual revenue.

Envision3: Strong Vision for the Future

Gary and Kevin Franz sound almost apologetic as they discuss the merits and unique qualities of Envision3, the printing, marketing and services company they debuted in 2000. After all, the Franzes point out, they're offering many of the same ancillary products and services—including marketing, mailing and fulfillment that have become de riguer for the early 21st century printing industry.

Three years and one month in federal prison was the penalty for the former controller of a printing company convicted of embezzling nearly $300,000 from her employer, the San Antonio Express-News reported.

Farquharson/Tedesco on Business Development: How to Hunt Successfully

No matter how many accounts you choose, limit the number of your suspects and prospects to a carefully selected, finite number and stick to it. Then work 'em baby! Be disciplined. Maintain a finite number of accounts chosen for maximum fit with your personal areas of expertise. You just might be amazed at the results.

Getting to GRAPH EXPO...the Hard Part

I, like many others trying to fly to Chicago for this year’s GRAPH EXPO, had my Saturday morning flight cancelled due to an intentionally set fire at a nearby FAA radar facility. Most of the out-of-towners I spoke with were exhibitors, and some did note cases where their printer prospects and existing clients opted to skip GRAPH EXPO altogether after their flights were cancelled.

The following is a sampling of some new wide-format, cutsheet and continuous-feed digital presses that were highlighted or on the show floor at GRAPH EXPO 14 in Chicago.

Facing flat or declining revenues, more than a few commercial printers are on the lookout for new opportunities to expand their offerings, drive growth and add new revenue. One compelling move can be a segue into packaging, especially labels and folding cartons, where printing expertise is required and the margins—often 9 percent or more—offer an attractive way to increase profitability while also adding value to one's business.

GRAPH EXPO 2014: The Allure That Is Chicago

Convenience is what attracts many printers to the great Midwest every Fall in search of, say, a certain piece of equipment, that software package that will make their workflow highly efficient, or research for future investments.

How to Make a Sale: A Print Buyer Weighs In

So, you're a print salesperson trying to get a new account. Maybe you're changing careers or are young, so you don't have much experience. Maybe it's a third-generation family business, or you got the job when "Where's the beef?" was airing on TV. Heck, maybe you're the company owner. Regardless, it can't hurt to get the perspective of a print buyer.

Reijmer/Russell on M&A Directions: Can We Talk? Not Necessarily

Acquiring or being acquired by another company can be a long, drawn-out and distracting process in which the proverbial cat can be hard to keep in the bag. With the guidance of a professional M&A adviser, you can be sure of what to say, when to say it and whom to say it to.

For this issue, we decided to take a look at four digital print shops targeting the high-end market, and how they meet and exceed their customers' expectations. There are a few common threads, but it is interesting how each company tailors its approach to its own personality, its target market and even its geographic location.

Following the successful launch of 3-D printing in six markets across the country, The UPS Store is expanding 3-D printing services to meet the growing demands of its small business customers to nearly 100 additional locations nationwide.

Twice within the span of a week, an accident at a paper mill claimed the life of a worker. Ricky Salter, 58, a maintenance employee at the International Paper plant here, was killed during an accident in the mill’s paper roll handling area. 35-year-old Brant Munster, a contract worker with Somatex Crane, died at a NewPage mill in Rumford, ME, after falling from a crane.

Earlier this year, InfoTrends and NAPCO—the publisher of Printing Impressions—developed a cooperative survey asking professional wide-format print shops a series of questions about their operational and financial performance to establish some industry benchmarks for some key metrics for the wide-format market. The important thing to remember about the following metrics is that they come from about 60 print shops from around the United States; and many have offset and digital, as well as narrow and wide-format, printing capabilities.