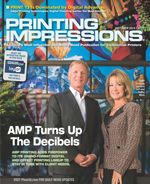 A Reason to Celebrate

The Zenger Group recently held an open house and ribbon-cutting ceremony to celebrate the opening of its new facility in Tonawanda, NY.

It seems Jeff Main has stumbled onto a somewhat simplistic philosophy that, quite frankly, makes one wonder why more printers haven't developed their own game plans around the mantra subscribed to by the co-owner of Dublin, CA-based AMP Printing. The philosophy? Make customers happy.

Bits and Pieces: The 'Hottest' Booth at PRINT

Konica Minolta Business Solutions has been shouting from the mountaintops about how hot its new KM-1/IS29 UV color inkjet press—a collaborative effort with Komori—has become, and apparently they weren't kidding.

Cenveo Inc. has executed a letter of intent to sell its Custom Envelope Division (CED) to Ennis Inc., a manufacturer of printed business products and apparel, headquartered in Midlothian, TX, for approximately $47.25 million in cash and the assumption of certain trade liabilities. In other Cenveo news, Robert Burton Jr. and Dr. Susan Herbst have been appointed to the company's board of directors.

The Shapiros act as a unit, in accordance with their mother, Inez Shapiro's wishes of a three-way partnership. The Shapiro brothers may not always agree, but they find common ground to the benefit of both companies. And, while there are no longer jobs sitting on the couch and kitchen table, the Shapiros refuse to rest on their laurels.

Angela Arcona, 56, the owner of Southwest Equipment for Hernando County, is accused of accepting monies to secure the purchase of printing gear between November 2011 and March 2013 with no intention of filling the orders. Arcona allegedly provided the victims with fraudulent sales invoices that indicated several sellers were using Southwest Equipment to broker the sales, according to WPVI-TV.

Leona Gebhart, the former comptroller for Henderson's Printing and subsidiaries, was arrested and charged with embezzling at least $151,130 during an 11-year period, the Altoona Mirror reported.

If 10-year-old trick-or-treaters can intuitively master the "APTT" (Attitude, Plan, Think and Tact) program, how hard can it be? Just by having read this article, you're well on your way to becoming an APTT salesperson.

Direct response printing solutions and marketing services firm IBS Direct has purchased selected assets of Berkshire Printing. IBS Direct, which ranked 153rd on the Printing Impressions 400 in 2012, will maintain a presence in Connecticut, keeping a sales and service operation in place to serve Berkshire Printing's customer base.

Minuteman Press of Norwalk: Solving Pieces of the Puzzle

When Greg Duffey and Joe Brenneis discussed joining talents to open a business, they initially thought a franchise printing company was not what they wanted, but after being presented with an opportunity to purchase a failing Minuteman Press in Norwalk, CT, they thought they might be able to turn it around.

PRINT 13, held in Chicago last month, barely filled the South Hall of McCormick Place—unlike the mega-shows in the 1980s when it would fill the entire McCormick Place complex. But, as anyone who attended PRINT 13 could attest, this was surely “Not Your Father’s PRINT Show.”

There was a distinct air of optimism in the halls of McCormick Place South, and Paul Hudson, president and owner of Hudson Printing, could feel it.

With only two sheetfed offset presses on the show floor, digital printing vendors were the 'hot' booths at PRINT 13. Here's a sampling of some of the production inkjet, wide-format inkjet and toner-based digital presses that were highlighted for commercial print shops

Sandy Alexander: Ownership of the Future

With roots that go back almost 50 years, Sandy Alexander, of Clifton, NJ, is the product of a long string of corporate mergers, executive shifts and proprietary realignments. The most recent of these came in the announcement that a management team under Michael Graff, Sandy Alexander's president and CEO, had completed a buyout of the company from its former owners.

Jobs created since the recession ended in 2009 have been centered around bringing in workers on a temporary assignment basis. This makes sense; it saves on benefits and gives management the flexibility to manage staffing without layoffs, etc. This new dynamic has created a need in how the Occupational Safety and Health Administration (OSHA) looks at protecting the employee and who is responsible for their safety while working as a "guest employee" at your workplace.

Recently, InfoTrends and NAPCO (publisher of Printing Impressions) surveyed 167 print service providers (PSPs)—72 of which were print-for-pay—and we were able to ask about their attitudes and expectations around wide-format digital printing. InfoTrends found that while initial investment price was not a major consideration, return on investment (ROI) is a critical part of the wide-format digital printing business for these shops.