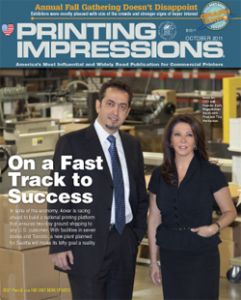 4over Inc. : Gambling with Success

It’s not an exaggeration to call 4over the most well-known trade printer in the industry. The $78 million firm now has facilities in seven states and Canada. “Our company took advantage of the economic downturn. We did the opposite of what everyone else was doing—stopping and waiting,” says Zarik Megerdichian, the CEO of Glendale, CA-based national trade printer.

Commercial printer and publishing solutions provider Creel Printing has acquired  Digital Lizard in an effort to provide  customers with a  one-stop solution. Digital Lizard has developed processing protocols to manufacture, finish and ship on the same day, enabling customers to meet fast turnarounds.

Leveraging the North American debut of its  inkjet production press at Graph Expo 2011, Xerox Corp. took a group on a side trip to Iowa to see the press in production. Now known as the CiPress 500, dmh Marketing Partners has been the first print service provider in the United States running the machine.

Wide- and grand-format printers really stood out around the show floor, with the size of some devices giving them the impression of being the new “heavy iron” in the industry. Even the new crop of inkjet presses for high-volume page production was overshadowed a bit by their wider brethren, as fewer vendors elected to bring machines to Chicago.

Instead of seeing a gaggle of tire kickers, the printers and trade finishers who perused McCormick Place South during Graph Expo 2011 had more sober intentions. There is clearly pent-up demand in the marketplace, particularly for finishing equipment.

Offset press output still comprises 90 percent of the printing done, by some accounts, but you wouldn’t know it based on all the attention given to digital inkjet- and toner-based  devices at Graph Expo. Lithographic press manufacturers aren’t standing still, however.

It’s been a while since I’ve written about Marvelle Stump, America’s worst, laziest, and all-around most incompetent printing salesperson. Marvelle sold his last real job back in 1987 just before his mama passed away. Mama Stump had been the print buyer at First Mississippi Bancorp and always took care of her baby.

The parent company of NewPage Corp. and some of its U.S. subsidiaries have filed for Chapter 11 bankruptcy in order to facilitate an orderly debt restructuring. NewPage's product portfolio includes coated freesheet, coated groundwood, supercalendered, newsprint and specialty paper.

A journey to Graph Expo in Chicago wouldn’t be complete without a trip to the Technifold USA booth. No, I’m not partial to binding equipment, nor do I get any particular jollies out of seeing creasing and perforating gear. But, you have to love people like Gina and Andre Palko.

The USPS is in dire financial straights; no one can argue with that. Shrinking mail volumes, onerous union contracts, inefficient work rules, outdated business practices, requirements to “prepay” retiree health benefits and Congressional meddling, are all contributing factors.

Prep for a Buyer Inquisition –Dana

A printer writes, “Margie,  we’re about to meet a team of nine buyers for the first time. We responded to their request for an RFP, and today we found out that we made the final four of prospective print partners. What advice can you give us?”

The Internet has proven to be something of an elixir, a cure-all tonic for trade printers that were either suffering or stagnating. It has played a large role in the growth, perhaps even salvation, of some trade firms. We’ve encapsulated three notable trade printers, along with a look at what’s fueled their fire and provided confidence in the foreseeable future.

RR Donnelley has acquired Lemont, IL-based Genesis Packaging & Design, a full-service provider of custom packaging, including design, printing, diecutting, finishing and assembly. Beyond packaging production, Genesis offers a broad spectrum of services, including the design and production of point-of-purchase displays and signage.

Outrageous selling delivers value beyond what prospects and customers expect. No one’s asking you to hop in a tank to sell printing, but occasionally you can and should move out of your “same old, same old” comfort zone and into the world of outrageous selling.