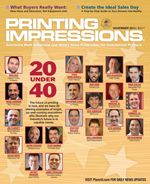 20 Under 40: Just a Sampling of Talent - Michelson

Choosing 20 graphic arts industry professionals—all under the age of 40—who are rising industry stars is,  admittedly, a subjective undertaking. Surely, some high achievers who might have qualified didn’t appear on our radar screen. Likewise, some people who were nominated elected to avoid the spotlight for personal reasons. These 20 up-and-comers weren’t just handed positions of authority. They typically worked their way up, toiling in several job capacities within their respective organizations, to earn their stripes.

It is 5:30 p.m. and your sales day is now behind you. But this one was not a typical sales day. It has been the "Ideal Sales Day." You look down at a clear desk. You look up at an empty computer screen. You look around at a well-organized office. Your inbox and outbox are empty. Your task list contains mostly checkmarks. You made sales calls, prospecting calls and, of course, sales. You sit back, take it all in, close your eyes and smile. You sit up in bed and think to yourself, "Dang. It was just a dream."

Ken Garner is taking the reins as CEO of AMSP/NAPL/NAQP, effective Jan. 12. He will replace Joe Truncale, who is stepping down to become CEO of the New York-based Public Relations Society of America.

Suttle-Straus, a regional marketing solutions provider, announced that the company's president, John Berthelsen, will be retiring at the end of the year, bringing to an end a career of more than 35 years. In his place, Ted Straus, 43, has been promoted to president of Suttle-Straus effective Jan. 1.

One look at our 20-under-40 list of up-and-coming printing industry executives reveals several truisms. One, the family-owned printing company is not under siege; subsequent generations of men and women are being entrusted to continue the mom-and-pop shop (though we generally don't think of multimillion-dollar companies in mom-and-pop terms). Secondly, there is a solid core of young men and women at the helm of longstanding, successful companies.

What Clients Really Want: Ideas that Dazzle, Information that Educates

Very few print customers care what presses you use for their jobs. Over time, as the workforce gets younger, this will matter even less. Clients expect you to print well, just as they expect you to communicate with them, produce jobs efficiently and deliver the finished goods on time.