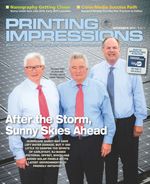 Successfully adding or expanding cross-media services requires careful consideration of factors on both the operational and business sides of an organization. It also requires developing a strategy supported by the right tactics. The five key considerations to follow offer a tangible starting point.

Dana on Marketing Messages: How to Host Client Events

Having spent roughly 10 years producing and emceeing print buyer conferences, boot camps, dinner events and networking sessions, I can tell you that hosting an occasional event for your customers will help you reap rewards that last a long time. And besides, print customers love a good party.

Digital Book Production: The Demands of On Demand

In "Crossing the Chasm," Geoffrey Moore described the stark difference in behavior and preferences among technology innovators and early adopters—about 16 percent of the population—contrasted with those of the remaining majority. Companies that don't account for these differences often fail, even when the technology itself thrives.

News of the definitive agreement on Oct. 24 whereby RR Donnelley (RRD) will acquire Consolidated Graphics (CGX) for more than $620 million rocked the commercial printing world. For CGX, the transaction provides an exit route for its 70-year-old chairman and CEO, Joe Davis. And, for RRD, Consolidated Graphics’ network of facilities in or near every major U.S. population center adds local sales and service touchpoints for Donnelley’s commercial printing group.

The Dingley Press announced that it has been reacquired by former owner, Christopher Pierce. The catalog printer was purchased from The Sheridan Group, a Hunt Valley, MD-based printing, publishing services and technology provider.

All in all, it was a good year. We will remember it fondly as there were challenges met, growth seen and targets hit. But 2013 was also full of regrets. So much opportunity missed. So many promises unfulfilled. Last year, as we gathered to bury 2012, we all told ourselves that we wouldn't let this happen to us again, that we'd learn from that year's mistakes and make changes.

Meeting Benny Landa for the first time may be as fascinating as learning about the latest technology he's promoting. That the father of digital printing is a genius nonpareil is unquestionable. As for the charges he is an unrepentant self-promoter and a showman...in truth, he brings more substance and less flash to the table.

Pictorial Offset of Carlstadt, NJ, turned to Solis Partners, of Manasquan, NJ, to install solar panels at its facility. Solis designed, engineered and constructed the 2,968-panel system that, so far, has reduced Pictorial's electric bill by 40 percent. Touted as the largest solar panel installation by any commercial printing company in the United States, the installation has (at press time) generated 1.15 million kWh since the installation, enough to power 1,255 houses for a month.

A pair of executives with ImageXpres Corp. have agreed to pay $75,000 in fines to settle financial fraud allegations brought by the U.S. Securities and Exchange Commission (SEC), the Rochester Democrat and Chronicle reported. John and Kevin Zankowsi, the executives, were sued by the SEC late last month on allegations that the financial performance of the company had been "hugely overstated" to investors between 2009 and 2011, the newspaper said.

Your company is unique with its own set of needs that probably don't match up all that well with other firms, even those that are roughly the same size as your shop. So grab a cup of Joe, have a seat and we'll help you get started on conducting a feasibility study…or at least give you something to think about as you ponder what a greenfield install or improvement over an existing system could mean to your printing business.