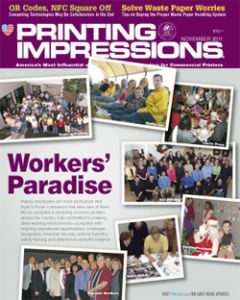 ‘Jonesing’ for Some Sales –Farquharson/Tedesco

Some 90 percent of all first-time sales calls go without any follow-up action. We call once. We stop by once. We send one e-mail. After that, we get busy with quoting, estimating and plant tours, and before you can say ‘Gutenberg,’ any possibility of momentum is lost.

A Fulfilled Workforce Costs Less in the End –Michelson

Despite national unemployment rates that continue to hover above 9 percent, many printers still lament how difficult it is to find, and keep, skilled workers. Printing plant closures and staff downsizings due to the prolonged recession have alleviated the problem to some degree.

Police in Augusta, GA, are on the lookout for a criminal who made off with thousands of dollars in jewelry from a mall in that city, courtesy of phony Visa gift cards. The WJBF ABC affiliate reported that police are on the hunt for a known suspect, whose name we won't use since he has not been charged with a crime (or captured) as of press time.

Phoenix Expands With All Out Asset Purchase

Printing’s Best Workplaces : The Cream of the Crop

There is a select group of companies in the printing industry that take an aggressive approach to offering working terms and conditions that attract and keep valued employees. How does your shop stack up against them?

Even before QR codes and NFC officially square off, there’s a movement to already dub NFC “The QR Killer.” Google instigated the matter in March 2011 when it announced it no longer would be supporting QR codes in Google Places and would be using NFC instead.

Quad/Graphics Inc. will cease production at its Richmond, VA, and Stillwater, OK, facilities as part of its ongoing plan to integrate operations following the company's acquisition of Worldcolor. A total of 365 employees combined will be impacted by the closures.

It was entirely coincidental that two of my long-time readers lifted a quote from my September column and produced a t-shirt bearing the quote. You remember the words—a one, a two, a three, “90% of success is showing up with a little talent.” So sayeth Harris DeWese, circa 2011.

Ron Davis, Printing Industries of America vice president and chief economist, has released a financial report focusing on the long-term future of print and print markets. The report explores how leveraging multiple functions of print can increase the longevity and viability of a printer’s success in the marketplace.

Paper recycling lacks the sexiness of a new press. Ever get jealous about the size of your competitor's baler? Didn't think so. Sure, it is a necessary evil, but if your shop prides itself on quality and attention to detail, then you can't short-arm your paper  handling system requirements.