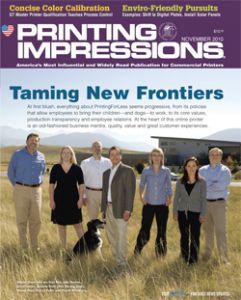 Today on PIworld Most Viewed Items

Presented here is a sampling of the most-read news, aggregated content and blog items from recent editions of Printing Impressions new daily e-newsletter—Today on PIworld.

Charges Are Filed in Woman’s Death

A printing plant owner and his manager are each looking at up to four years in prison after being charged with involuntary manslaughter and labor code violations in the 2008 death of a pregnant worker who was crushed by a machine, the San Francisco Chronicle reported.

As its title promised, the “Unlocking the Mystery of Inkjet: The Printer’s Perspective” panel discussion offered insights from a trio of firms that are innovators in the inkjet arena, as well industry leaders.

There’s a time-tested formula called the 40/40/20 rule that offers proven guidelines for direct mail campaign creation. Campaigns run according to this principle are likely to have a greater impact on more prospects, and your customers will have a very merry Christmas 2010 (and 2011…and 2012).

With his once-thriving business and home both gone, casualties of a $750,000 embezzlement perpetrated by a former employee, Jamie Wollens won’t be seeing retribution any time soon. Most galling for the founder of now-defunct Digital Ink, the person who allegedly committed the crimes is back on the streets.

Printers around the world increasingly are paying attention to reducing the environmental impact of their operations.

Just prior to the baseball playoffs, several players from the apparently not-so-loved Tampa Bay Rays were fuming that there were far too many empty seats on most nights, despite the fact that the team qualified for the postseason. Perhaps the team should take a page from the book of Triestina, an Italian soccer team that found a way to fill their empty seats via a little printing ingenuity.

Just mention the term G7 certification and you can hear a collective cringe coming from the folks at IDEAlliance, the printing industry association unofficially tasked with governing printing methodologies, specifications and standards. G7 is a “qualification” program; the law sees a difference between the terms. IDEAlliance is working on a certification program.

The Minnesota printer placed an order at Graph Expo here for an end-to-end digital printing solution, including print heads, presses and consumables, all manufactured by Kodak. Japs-Olson also signed on for a new eight-unit Goss Sunday 2000 web press.

Andrew S. Field, founder of PrintingForLess.com (PFL) in Livingston, MT, never had any grand designs about owning an online venture, let alone a printing company. But, one day in 1996, while fishing with an old buddy who was about to lose his job at an in-plant printer, the idea was floated to Field that he should take a stab at starting his own print shop.

Modern Litho-Print hasn’t been afraid to make critical software investments during the economic downturn, or to look internally at ways of making the general commercial shop leaner and meaner.

Quad/Graphics is restructuring its Canadian operations, closing a plant in Quebec and shedding more than 300 jobs as it seeks to create a more efficient, flexible manufacturing platform.

Testimonies from two printers—Presswrite Printing and Lithographix Inc.—that recently made the decision to stop leaning on “the grid” for 100 percent of their energy needs. Making the move to solar has certainly left these businesses with a sunny disposition.

The Age of Enlightenment? —DeWese

This column starts off the 26th year of authoring them. It’s also my first column written on a new desktop PC. I forgot that last month was my 25th anniversary writing this column. My first column was published in November 1984.

USPS Stuck Between Rock and a Hard Place —Michelson

The news that U.S. Postmaster General John Potter announced his retirement effective Dec. 3 is just one more chapter in an ongoing saga at the U.S. Postal Service (USPS). Potter was the 71st successor to Benjamin Franklin and—serving nine years at the helm of the nation’s second largest civilian employer—was actually the longest serving Postmaster General since the 1820s.

WF Capital said it also filed a proposed plan of reorganization that provides for full payment to all creditors and the continuation of WorkflowOne’s business in the normal course.