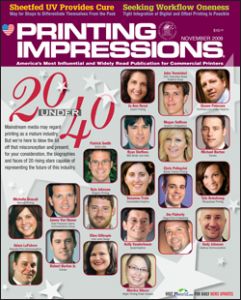 Francis Canzano Jr., president of Acme Printing, died Oct. 13 after a long battle with cancer. He was 67. A member of the Boston Litho Club, Mr. Canzano won numerous national and international awards in the graphic arts industry. He was inducted into the Printing Impressions/RIT Printing Industry Hall of Fame in 1999.

Commercial printer and bindery news from Across the Nation in Printing Impressions November 2009.

Consolidated Graphics (CGX), based here, announced that its St. Louis-based Nies/Artcraft subsidiary has acquired certain assets of The Kohler Print Group and Pinnacle Press, which is also headquartered in St. Louis. Following the completion of the transaction, Nies/Artcraft will do business as Nies/Kohler. Terms of the deal were not disclosed.

Faces of the Future

There’s a healthy-sized generation of young print professionals who are invested in the viability and future of the graphic arts industry. Some were born into printing dynasties and are keepers of the flame. Many came through print management courses at some of the country’s most prestigious colleges and universities. But all of them possess a tenacity, enthusiasm, perspective and vision that indicate the future of printing is in qualified, capable hands.

I recently came across a white paper authored by Jacob Aizikowitz, currently president of XMPie, a Xerox company, entitled “Can Print Personalization Be Highly Creative and Efficient? Expanding Beyond the Form Metaphor.” While this is a vendor white paper, it is written in a very neutral manner and discusses an important topic well worth reading.

Human error is being blamed for the Oct. 18 explosion at American Packaging that claimed the life of a worker. Jeffrey Doxtator, 47, died when sparks from a grinder he was operating ignited vapors. The blast caused Doxtator internal injuries and triggered a fire, according to the Wisconsin State Journal.

The “20 Under 40” rising stars profiled on the following pages validate that our industry does possess 20- and 30-something-year-old professionals with the brain power, leadership skills and tenacity to tackle these challenges and ensure that marketing services providers remain viable.

The workflow concept is being extended even further to achieve a continuum of production capabilities that can span from digital (toner and ink-jet, including wide-format) through sheetfed and web offset printing. This means having an integrated workflow that can feed all of the printing platforms, as well as implementing color management and having substrates available to “match” the printed results across the board.

Standard Register Is Under Fire

Standard Register disputes the claim that a female employee was driven out of her job because of sexual harassment, but the company must contend with a lawsuit that's been filed by the U.S. Equal Employment Opportunity Commission, according to the Dayton Daily News.

Not to wave the proletariat flag, but here’s a little something to kick around as you ponder year-end bonuses and holiday parties (hey, no snickering there in the back) for your faithful employees. Believe it or not, you’re being assessed at the moment, and a negative report card could end up costing you some incredibly talented people.

The Drivers of Greatness —DeWese

According to NAPL’s president and CEO, Joe Truncale, the association is moving in new and exciting directions with its consultative approach, not the least of which has been its M&A Advisory Service. Truncale also didn’t rule out the possibility of collaborating with PIA on future projects.

After several consecutive years of rate increases, the USPS is holding the line in 2010. In an internal postal memo, Postmaster General John Potter announced there would be no rise in prices next year for market-dominant products, including first class mail, standard mail, periodicals and single-piece parcel post.

UV Provides Cure for Many

A strong argument can be made for having a press equipped with in-line UV printing and coating capabilities, and it goes like this: Many of your competitors cannot, or will not, make the leap to UV because of the financial commitment involved.

Worldcolor has appointed Daniel Scapin as president of Logistics and Premedia. Scapin, a 30-year industry veteran, has served as president of logistics at RR Donnelley, Moore Wallace and Quebecor World, and is credited with the creation and growth of the world’s largest print logistics businesses.