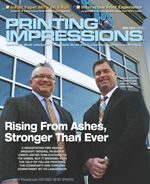 Are QR Codes on Path to Extinction? —Mark Michelson

QR codes were once wildly heralded as the best way to add interactivity to a printed piece. And, with QR (Quick Response) code readers accessible via users’ smart phones, conventional wisdom would dictate few impediments to consumers actually using them. But, an insightful blog, “QR Codes Are Dead,” posted by “Today on PIworld” enewsletter contributor Sabine Lenz, really struck a nerve with many readers about her contention that QR codes are becoming yesterday’s technology.

Augmented reality (AR) has an indefinable value, limited only by the imagination of the creative people behind its genesis. Yes, it has great potential as a lead generator, collecting pertinent data from the people interacting with it. But it can go far beyond that, engaging people wherever they may be, as long as they have their smart phones with them.

The range of papers suitable for continuous-feed inkjet printing continues to expand. Still, market penetration for high-speed production inkjet remains low as challenges remain for high ink coverage, high-quality graphics applications. The market is experiencing strong growth as challenges with ink and paper are being met every day as the industry develops a deeper understanding of the value proposition for continuous-feed inkjet. Consultative selling is essential, not only for paper mills, but also for printers, to sell the value proposition and also to better understand the market needs.

Along with the help from the local government and the outpouring of community love and support after a fire tore through its Indiana, PA, facility, Creps United Publications is 100 percent back in business. The company is now in a bigger and better facility, with newer and more efficient equipment. A lion's share of the employees are also back in the fold.

How do you share information on a regular basis with your customers and best prospects in ways that will impress and influence them? Here are seven simple marketing ideas that will effectively promote your business by providing information print customers need.

At the Heidelberger Druckmaschinen "Digital Sneak Peek" event held early last month in Heidelberg, Germany, CEO Dr. Gerold Linzbach told a room full of international journalists and industry analysts that the company is not your father's Heidelberg anymore. Although the manufacturer once held the belief that its customers sought homegrown, "industrial-strength" output solutions developed solely by Heidelberg, Linzbach admitted the need to change that inward mindset throughout his organization.

The former treasurer of Harmony Press has pleaded guilty to stealing more than $657,000 from the company, a move that prompted prosecutors to drop similar charges against her husband, The Express-Times reported.

Being a useful information provider is the key differentiator that will get you through price objections, rocky client experiences, organizational change and other barriers lying between you and your goals.

Marketing Services Providers: Separating the Contenders from the Pretenders

Pittsburgh-based Matthews International has reached a deal to obtain Schawk Inc. for about $577 million, the Pittsburgh Business Times reported. As part of the deal, Schawk shareholders will receive $11.80 in cash and 0.20582 shares of Matthews stock for each Schawk share.

We Are Family: Menasha Inks Agreement to Acquire Strine