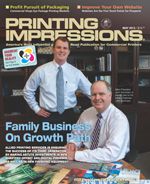 An accident involving a forklift is believed to have caused the death of mechanic Terry Lefever at an RR Donnelley plant here April 8, the Lancaster Intelligencer Journal reported. Lefever, who is also survived by his wife, worked 26 years for RR Donnelley as a lift truck mechanic.

Commercial printer equipment installations and other news from Printing Impressions’ May 2013 edition, featuring 4over Inc. and Execuprint.

Allied Printing of Manchester, CT, is bullish on the future, given its recent hiring of 10 new sales positions in a period when many firms are contracting. Following the customer-centric mantra and choosing like-minded partners will go a long way toward determining its success down the road.

Printers need to accept that your Website is the first place an interested person will visit when hearing or seeing your company's name. When I get to your URL, I expect to find out exactly what you do, what products and services you can offer me, and why I should consider you and not your competitors. All in under 90 seconds.

Sanjay Sakhuja, owner and CEO of Digital Pre-Press International, and pressroom manager Alick Yeung pleaded guilty in San Francisco Superior Court for the death of Margarita Mojica, who was fatally injured when she became crushed by the cutter/creaser on which she was working. Prosecutors said the machine suddenly activated as she reached into it. She was also reported to be pregnant.

Efi Arazi Was in a Class All by Himself –Michelson

Heralded as the founder of the Israeli high-tech industry and even described as the Israeli Steve Jobs, Efraim "Efi" Arazi died April 14th on his 76th birthday after suffering a long bout with Alzheimer's disease. His legacy in the graphic arts industry lives on through the entrepreneurial, innovative and visionary spirit that rubbed off on many ex-Scitex employees, who've left big industry footprints in their own right.

Farquharson/Tedesco on Business Development: Sales: Harder Now or Before?

Is it harder to sell now or way back when? Let's look at a few sales challenges and make a comparison. Before we begin, let's define "way back when" as the pre-Internet era. If you need a more specific date, let's go with the early '80s. Mullets were hot and disco was dead. Okay. Let's have a look...

A vice president and part-owner of mail preparation specialist RMS Direct pleaded guilty to conspiracy to commit mail and wire fraud, the Gazette reported. Stephen Reid, 50, was accused of cheating clients out of more than $628,000, according to the U.S. Attorney's Office in Baltimore.

Here at Printing Impressions, we managed to find a handful of printers who have either added packaging as an ancillary service or have completely abandoned the commercial world in favor of flexible packaging, labels, folding cartons and the like. In the end, their journey may not be one you wish to emulate, but their ideas may contain value for your business.

Quad/Graphics will enhance its commingling capabilities with the creation of two new regional commingling centers: A Midwest center in New Berlin, WI, and an East Coast center at its existing direct mail production plant in Westampton, NJ.

It was love at first sight for Russell Marcum, director of commercial printing firm Texoma Print Services in Durant, TX. At least, that is how he felt after seeing a five-color, 29˝ Presstek 75DI digital offset press in action at the Presstek demo center. Last June, the press was installed in Texoma's 10,000-square-foot facility, which the company moved into earlier this year.

This Celebration Is a Classic

The folks at Classic in Charlotte, NC, demonstrated that they know how to throw a party, as the employee-owned company celebrated its 30th anniversary on April 12 with a "Thirty Rocks" themed bash.