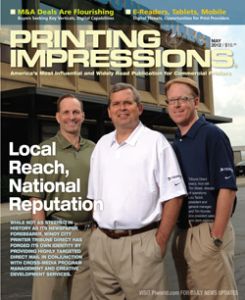 10 Ways to Get More Attention –Dana

One of the most common questions I get from printing industry salespeople is simply this: “Margie, can you tell me how to get buyers’ attention?” Let’s face it, print sales reps today need a brand new bag of tricks and tips to get noticed by prospects.

Philip Sangenario left this world in 1991. His tale, like those of many from Mr. Sangenario’s generation, was never given the recognition it deserved. He served with the 101st Airborne Division during World War II in the “European-African-Middle Eastern theater.” He parachuted into Normandy, France, on D-Day (June 6, 1944) from the first of 20 airplanes of the 502nd Parachute Infantry Regiment.

“Print is still the cornerstone of the magazine business,” states Dr. Samir Husni, a.k.a. Mr. Magazine. Magazines that banish the print edition generally sign their own death warrant, Dr. Husni notes, and none are thriving as online-only editions.

Featuring a full itinerary of user group meetings, speakers, more than 150 educational sessions and an exhibition area, EFI once again showed it had the winning hand by drawing 1,100+ participants to its 13th annual Connect users’ conference held at the Wynn Las Vegas last month. With it increasingly harder to get printers to attend industry conferences and trade shows, Connect is one of a small handful of annual events bucking that overall trend.

Windy City printing giant RR Donnelley is closing its plant in Mendota, IL, the Chicago Tribune reported. The move will result in the loss of more than 200 jobs. Donnelley provided 60 days notice prior to the slated May 28 closure.

Jive Printing is accused of “encouraging guests to drink heavily by providing copious amounts of free alcohol and passing out shots of liquor by bartenders, who did not properly monitor the guests’ level of intoxication,” the suit contends.

For those printers in some level of distress, this may be an opportune time to cash out as opposed to doubling down in an industry that seems to be banking more on digital than offset presses. The M&A machine is running wide open at the moment.

Mobile technology opens the door to make print and other media types measurable, interactive and engaging through the use of mobile barcodes (QR Codes, Microsoft Tags and more), mobile messaging and even Augmented Reality. Over the past few years, InfoTrends has been tracking the increase of these mobile elements being integrated with traditional media.

Karen Brinker, owner of AlphaGraphics in Hartford, CT, introduces Republican presidential candidate Mitt Romney to the audience on April 11. Brinker, an AlphaGraphics franchisee for more than 20 years, also has a store in Greenwich, CT. She was selected by the Romney campaign to host the speech due to her success as a female business owner.

TJ, your “Take no prisoners” column on sales compensation in the April issue brought back a lot of memories and really got me thinking about the subject. As you know, the subject matter is a lightning rod for controversy regardless if you’re setting up a new plan, changing an existing plan, or writing about it for Printing Impressions. But allow me to take a walk down memory lane.

Tribune Direct : The Magic of Technology