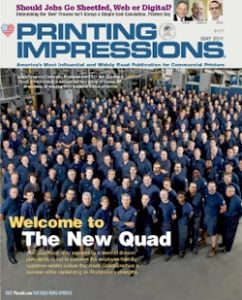 I have quit Facebook! I bet you don't know another person who ever quit Facebook. I'm using this column to say goodbye to all my "friends" on Facebook. I'm not saying that you should quit Facebook. If you sell printing, I encourage you to be an avid Facebook participant, as well as a member of all the other social network sites.

A scammer posing as a representative for one of the nation's largest printers managed to con a major publisher into wiring $8 million into his bank account late last year. Media mogul Condé Nast allegedly began sending payments for printing jobs to a bank account it believed to be owned by Quad/Graphics of Sussex, WI, which prints magazines for the publisher.

Congress voted to repeal the unpopular aspect of President Obama's health care legislation that would have forced businesses to file Form 1099 tax forms for every vendor that sold them in excess of $600 in goods. Though not related to health care, the Form 1099 law—slated to take effect in 2012—would have helped pay for part of the reforms.

The term "hero" is often carelessly bandied about these days, but Ken Lanci may well end up being a difference maker in the scrum between NFL owners and players. Lanci, chairman, CEO and owner of Cleveland-based Consolidated Graphics Group—and the holder of 10 personal seat licenses (PSLs) to watch the Browns—took a most logical approach: he sued the NFL, seeking more than $75,000 in damages.

Quad/Graphics : An Affair to Remember

As affairs go, one would be hard-pressed to top the $1 billion deal in 2010 that enabled Quad/Graphics to acquire Worldcolor. At face value, the transaction takes on the appearance of a snake swallowing a much bigger prey.

The following is a look at each of the Quad/Graphics divisions that were most impacted by the acquisition of Worldcolor—Commercial and Specialty; Retail Inserts, Books,  Directories and Canada; and Magazines and Catalogs—along with market assessments from the division presidents.

In static sheetfed, web offset and digital printing, the term “crossover” denotes the number of impressions at which a per-unit cost advantage can be gained by switching a job from one process to another. Technological advancements continue to enable companies that offer all or most of these processes to be competitive over a wider range of jobs, extending the run length crossover between processes.

Outlook Group appeared to be the hardest hit of the local homes and businesses, with its building in "tatters" and debris strewn a football field away. No one was injured. Roughly 100,000 square feet of the company's 650,000-square-foot facility was impacted, according to a report on its Website.

Transcontinental will be closing its T.R. Offset printing plant in Trois-Rivières, Quebec, on June 4. Production of the daily paper Le Nouvelliste, the only publication printed at the plant, will be transferred to the new Transcontinental Transmag plant in Montreal, which recently has benefited from more than $60 million in investments.

The commercial printing industry is a treacherous jungle that consists of big cats and little cats. Life is good for the big cats. They're known and respected throughout the jungle, enjoy strong relationships with other animals and usually capture the biggest kills.