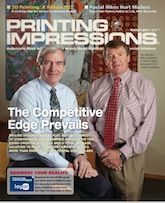 Linda Martinelli, who heads Proforma Graphic Printsource, is using her bovine affinity to compete for a possible berth in the Champions Tour Finale in Las Vegas that features a $500,000 purse. Well, Martinelli will compete in the form of her prized bull, named Proforma, which first must excel in the two-year-old champions class at the Champions Tour 1 in Orchard, TX (the event took place just as this issue was going to press).

How am I defining e-mail marketing? For this column, I'm writing about one specific product: a regular e-mail newsletter that you send out to customers, prospects and anyone else who's interested enough in hearing what you have to say.

It's been a year since Canon Business Solutions and Océ North America were consolidated into the newly created subsidiary Canon Solutions America (CSA). To celebrate the anniversary, Canon held a press event in Delray Beach, FL, last month. CSA President and CEO Toyotsugu Kuwamura lead off by detailing how Canon accomplished the integration and combined the different sales groups successfully.

International Paper (IP) announced that distribution solutions businesses xpedx and Unisource Worldwide will merge under the terms of a definitive agreement that will result in the creation of a new publicly traded company.Upon the expected completion of the merger in mid-2014, the new company will have projected annual revenues in the $9 billion to $10 billion range, and will have about 9,500 employees across more than 170 distribution centers in North America.

The numbers of 3D printers installed at commercial print shops is still quite small. Most devices are purchased by hobbyists, online operations catering to consumer projects, and service bureau-type installations servicing engineers and prototype designers in the medical, industrial and manufacturing markets.

If you would consider yourself a veteran salesperson (see also, "Vintage," "Old-Sc

From the early days of low-resolution line printing through the many evolutions that brought us inkjet imprinting technologies and, finally, the full-color production workhorses of today, inkjet is a highly developed and reliable technology. But somewhere along the way, strong mythology developed that tries to pigeon-hole high-speed production inkjet. Believe the myths and you may miss an opportunity.

Which type of person is Jim Andersen, the CEO of Chanhassen, MN-based IWCO Direct? A hint: You don't want to play Andersen in chess, because he will chart out your demise while you're still placing pieces on the board. The high-energy chief exec guides one of the nation's leading direct mail printing enterprises. IWCO Direct posted sales of $368.9 million for 2013, an 11 percent increase from 2012. More growth is envisioned for 2014.

According to Jim Workman, assistant vice president at Printing Industries of America (PIA), there are several patent owners and law firms trying to flex their muscles seeking licenses and/or payouts, but the two most active litigators are CTP Innovations (represented by Nashville, TN-based Baker Donelson) and SkipPrint (represented by Maschoff Bernann in Park City, UT).

The USPS is broken, and there are so many selfish motives permeating the committee rooms that have been tasked with devising a going-forward blueprint. Although the last postal reform effort is only seven years old, it already seems antiquated and unsustainable (the understatement of the century). And the odds of Congress enacting an encore during 2014 are not favorable.

Quad/Graphics doesn't fall into luck; you don't become a $4 billion-a-year performer by being in the right place at the right time. So while customers did, in fact, begin to clamor for their print provider to add video production technology to its arsenal, the 2010 development of Quad's media solutions studio in Bloomington, MN, is hardly a plug-and-play tale. One thing is certain: This is an offering that charted with a bullet.

The mailing and printing industries suffered a hard loss in early February when the Senate committee on homeland security and government affairs voted 9-1 to advance the Postal Reform Act of 2013 to the Senate floor. A last-minute amendment from Rep. Tammy Baldwin (D-WI) to maintain the current pricing structure was soundly rejected by the committee.

Quad/Graphics has acquired UniGraphic Inc. The acquisition fortifies Quad/Graphics' commercial and specialty printing, in-store marketing, and digital and fulfillment solutions for businesses on the East Coast. It also strengthens its ability to service national retailers' large-format and in-store marketing needs, adding an East Coast presence to its existing Midwest and West Coast locations.

It seems some people in control of the financial ledgers at several printing operations have been taking liberties with the checkbooks. Two unrelated examples of such thievery were revealed recently.