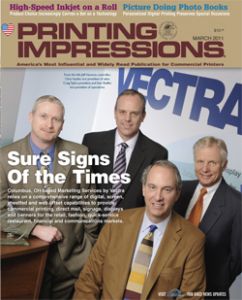 Udi Arieli, a director with EFI, was bursting with pride at the news that his daughter, Karni, and her husband, Saul, were nominated for an Oscar in the Short Film category. Karni and Saul directed and wrote "Turning." The short was produced as part of BBC Film Network's BBC Drama Shorts 2009 commission.

Getting a Head in the Game

Differences in the inkjet imaging systems now being employed can have an impact—to varying  degrees and relative to each other—on head cost, failure rate and cleaning/maintenance requirements; substrate flexibility; print resolution; color saturation; print width; and more. It doesn't quite rise to the level of an apples to  oranges comparison, but the technology has very distinct flavors.

Marketing Services by Vectra : Printing Signs of the Times

Obama Throws the USPS a Lifeline

In an effort to cut costs and help offset dwindling mail volume, the United States Postal Service (USPS) could close as many as 2,000 facilities in addition to the nearly 500 previously targeted for closure, according to the Wall Street Journal (WSJ). While the news organization termed the facilities as "post offices," a majority of the locations ticketed for closure are actually stations and branches, typically smaller places without retail capabilities.

There's been a flurry of announcements recently regarding sales, distribution and pooled R&D resource agreements between several  of the leading lithographic and digital press manufacturers. And, as the dance partners pair up, the mammoth Drupa 2012 exhibition in Germany will likely serve as the "dress-up ball" where these technology collaborations between traditional offset and digital press manufacturers culminate in a rousing crescendo of new developments.

Consumer demand for photo books has been gaining in popularity for several years, and there is a bevy of “social expression” products built upon that foundation—personalized calendars, key chains, mugs, posters, buttons, cards, calendars, mouse pads and countless other goods.

Printer Killed While on Vacation

A holiday turned to tragedy for the co-owner of a printing facility who sacrificed his life for the safety of his girlfriend. Roy Stout, 57, was struck and killed by an automobile in Negril, Jamaica, on Feb. 4 after pushing Cheryl Gillenwater out of the vehicle's path, WLEX-TV in Lexington, KY, reported.

Print salespeople that implement intelligent "Share-of-Customer" (SOC) grab strategies will position their businesses for a happy and healthy 2011. Read on for a discussion of how to increase your average SOC, and how the results can be stunning.

An RR Donnelley plant here has given 60 days' closure notice to its employees, a move that will leave 177 workers without jobs, according to the Greeley Tribune. The workers were told of the decision during a Feb. 9 meeting, and the plant is expected to permanently close its doors on April 11.

This column will provide you and your company with an opportunity to participate in a first-ever National Scavenger Hunt for Graphic Arts Company Growth. That's an easy acronym: NSHGACG. The object of the Scavenger Hunt is to develop new accounts for your company.

The Paper Chase for Inkjet

Paper manufacturers  have adopted several strategies to optimize coated and uncoated stocks for running on the emerging array of high-speed,  continuous-feed, color inkjet presses. While some papers may need to be fine-tuned to run on individual brands of presses, an additional surface treatment may also be required with certain paper/press combinations, especially coated stocks.

The most viewed stories from Printing Impressions’ daily e-newsletter—Today on PIworld—for the past month.