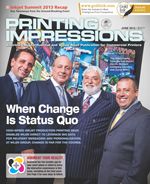 Bits and Pieces: Viewers Get to Marvel at Firm

In an age when we are endlessly fascinated by all things electronic, it is refreshing to see appreciation for the timeless art of heavy iron manufacturing. A two-minute piece highlighting the capabilities of package printer Huston Patterson shot at its 110,000-square-foot plant in Decatur, IL, did just that when it appeared on the "Manufacturing Marvels" segment on FOX Business Network. The segment aired March 21 during "The Willis Report."

A hotel and winery resembling a chateau in the French countryside surrounded by vineyards, but actually situated north of Atlanta, served as the perfect backdrop for Kodak to toast its appreciation for feedback from nearly 200 customers at its 2013 Graphic Users' Association (GUA) North American conference on April 22-26. Chris Payne, director and VP of marketing, Commercial Imaging Business, provided an overview of Kodak's growth strategy.

The former Vertis workers who were let go after their Fort Erie plant was not included in the sale to Quad/Graphics may have ended their picketing, but they're still battling to secure at least part of the C$2.7 million they say is owed to them, the Niagara Bullet News reported.

Farquharson/Tedesco on Business Development: Mimic How the Octopus Adapts

Since 2006, the number of U.S. printing facilities has declined about 40 percent. And total printing industry output has declined from the mid-$170 billion range to around $140 billion. You don't have to be the Freakonomics guys to figure out this has been a TOUGH situation for us.

Hess Print Solutions and its subsidiaries (HPS), a print provider of catalogs, books, publications and educational products, announced that HPS has entered into an agreement to sell substantially all of its assets to an affiliate of Bang Printing.

The inaugural Inkjet Summit 2013, held at the Ponte Vedra Inn & Club in Ponte Vedra Beach, FL, in April, was a first-of-its-kind conference model for the printing industry. One of my biggest takeaways after attending the Summit was the consensus among printer attendees, leading consultants and participating industry suppliers alike that inkjet production printing will be a disruptive technology.

Sponsors of the Inkjet Summit 2013, Canon Solutions America, Finch Paper, Ricoh and Xerox Corp., share their thoughts on the inaugural event that was held in April at the Ponte Vedra Inn & Club, near Jacksonville, FL.

The beauty of UV and other coatings is that they allow the customers to sell the sizzle instead of the steak which, from a marketing point of view, is much easier to accomplish. Greg Iannuccillo, vice president of sales and packaging for Packaging Graphics—a member of The MATLET Group family based in Pawtucket, RI—points out that much of the UV work his firm produces is geared toward the home and personal care spaces.

Though the Wilen Group may have one eye constantly peeled on the future, the other (from a printing point of view) is focused on the world of direct mail. The overall organization acts as a full-scale marketing services provider, from concept to delivery, and cringes at being pigeon-holed as a printer, mailer or ad agency.