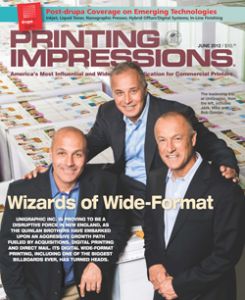 Digital Finishing : Find Your (In, Off, Near) Line

The in-line, off-line or near-line finishing debate is anything but a debate in the digital production arena, but it is interesting to note the configurations and the rationale behind them, as they vary from printer to printer.

Characterizing drupa 2012 as another inkjet show is too limiting to capture the broader digital printing focus of the developments announced. Nanographic Printing, liquid-toner presses and hybrid offset-inkjet configurations where every bit as prominent, and the B2 format dominated the product introductions.

Digital technologies captured many of the headlines during drupa 2012, but that doesn’t mean there weren’t a host of newsworthy lithographic press introductions, technology demonstrations and productivity enhancements shown within the stands of traditional press manufacturers.

With the fairgrounds spanning 19 halls, it’s simply not practical to cover all that the show had to offer. For a taste of the rest, the following are some of the key announcements made in other hot product categories, including bindy and finishing, digital plates, Web-to-print and wide-format printing.

There was a great deal of anticipation about Benny Landa and the debut of his Nanographic Printing process among the trade press and industry pundits leading up to drupa 2012. Throughout the show, Landa starred in five daily presentations within Landa Corp.’s 300-seat theater.

In the grand scheme of things, the Broncos’ decision to 86 their traditional 500-page playbooks for the 2012 season in favor of iPads is more symbolic than impacting. The assumption is that the Broncos probably printed their playbooks in-house, or took it to a local copy shop.

My career up to this point has placed me right in the middle of the print buyer/print manufacturer community. Paying attention to what makes print buyers “tick” comes naturally, and it has highlighted a few very significant differences among the buying pros in the workforce today.

The Similarities of Sales, Sports –Farquharson/Tedesco

The sales world and the sports world aren’t so different. Success in both requires preparing, making adjustments and making sure no detail is overlooked. In a sales capacity, you’re looking to position yourself where more balls are hit. Sometimes you’ll have to adjust your schedule to your clients’.

Diversification has served UniGraphic Inc. well during arguably the most difficult economic period in the printing industry since the Great Depression. It is bullish on the future of all things large following the acquisition of two big-bodied inkjet printers.