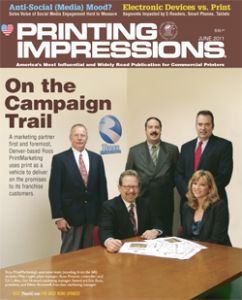 If you're active on a few social networking sites, you can continuously learn about your particular market and what the business trends are. You'll find out what prospects and even customers think about communications media. You'll come across people talking about your industry and maybe even your business.

In the case of Ross PrintMarketing, the printing element is not as important as the overall campaign. The value proposition offered by the Denver-based firm is as a purveyor of marketing tools, some of which are print-based (such as direct mail), and others that are data-driven (including response rate and ROI analysis).

Car Wrap Turns into a Movie ‘Wrap’ for Printer –Michelson

Stephen Hoey, president of wide-format graphics printer KDF Reprographics, had no idea that a request to produce the vinyl vehicle wrap for a Mini Cooper "on the cheap" would lead to several related print jobs, a role in a movie and national exposure for his Rockleigh, NJ-based company.

Andy Surface of Alvin, TX, who managed to lure Condé Nast into depositing nearly $8 million into his bank account under the guise that he represented printer Quad/Graphics, has relinquished his claim to the money, Forbes reported.

Jeff Anderson, owner of Proforma Prosource Marketing Group, has stepped out of his daily routine and climbed onto a bicycle for a trek across the country to raise awareness for Big Brothers and Big Sisters. His journey began on Mother’s Day in Los Angeles and will conclude June 24 in Boston.

Opportunities abound for printers to leverage electronic alternatives, particularly for clients who want to have multi-channel connectivity with consumers, be it in books, magazines, advertisements, direct mail, etc. In order to appease the masses across numerous platforms, printers need to become adept at as many technologies as possible.

Get Lost on Memory Lane –DeWese

WOW! When I have finished this June column, I will have written 296 1,250-word columns for Printing Impressions since I wrote the first one. I was curious about the topics addressed in these 296 columns about selling in the printing industry. I'm going to revisit those topics here to see if I have covered everything.

The staff at Fusion magazine, Kent State's lesbian, gay, bisexual and transgendered (LGBT) publication, were apparently angry and frustrated that a trio of printers refused to print their spring edition due to the use of language and a rather graphic image of a student wearing a leotard, leaving nothing to the imagination.

Jostens announced that it is  establishing a new memory book facility in Clarksville, TN. Its existing Clarksville production facilities will transition into the new operation following completion of the 2011 school season. As part of the transition, Jostens will move the memory book and commercial printing production from its State College, PA, facility to Clarksville after the completion of the current yearbook season.

Imagine having a gnome sit on your shoulder and whisper negative thoughts into your ear. All day long, you'd hear comments that would keep you from doing good things and urge you to do bad things. He'd tell you why it won't work, why you're wasting your time and urge you to just quit. Everything he tells you is worse than a lie. They're all assumptions. Actually, you don't really need to imagine this "Assumption Gnome" scenario.

Offset & Beyond Looks At Future of Industry

The U.S. Department of Labor’s Occupational Safety and Health Administration (OSHA) has cited Focus Direct with 12 serious, one repeat and four other-than-serious safety and health violations after an inspection found that workers were exposed to amputation hazards at the company’s facility here. Proposed penalties total $83,000.

A new StrongMail study asked 925 marketers where they are spending their marketing dollars in 2011; 57 percent said they are increasing their social media spend. While the ROI on this investment is not entirely clear, that hasn't deterred businesses of all sizes from deep and increasing engagements.

The Masters of Data

For Prince Frederick, MD-based DirectMail.com, combining ink-on-paper and technology is something the company has done quite well since it opened for business 41 years ago. In the past 10 years, its principals have fine-tuned their direct marketing approach by combining data and print with new digital technologies.

W2P's adolescence has been a rough one, with printers learning some expensive lessons. But, it has also been an exciting time for printers that offer W2P capabilities. Some have tossed away off-the-shelf software packages in favor of crafting their own solutions to meet the needs of particular customers.