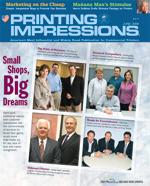 Ah, the Power Of Advertising --Cagle

WE GET all kinds of phone calls with strange requests. People want to know if we will publish their memoirs. Or, they want to know about how to get published. I even get two or three calls a year from people wanting to know if I can forward their medical records to their new doctor. Apparently, my number closely resembles a university healthcare record-keeping department.

From Press to Bindery, a Unique Approach from IMC America

IMC America has built a reputation of supplying quality automation products for the pressroom over its twenty five year history. Recently, Ward Walsh, President, and Ric Mayle, Vice President Sales & Marketing, have expanded their line of equipment into the binding and finishing area.

The School District of Palm Beach County and Océ North America announced today the selection of nearly 60 middle and high school students to participate in the 2009 Océ Future Authors Project. About 15 of the students will be participating from Glades Central High School through distance learning technology. Seven graduates of the program will be returning as mentors.

IT DOESN'T take very long to figure out that relationships are fundamental to the core values of Mike Peissig. His life has been based on long-term commitments to people he trusts and believes in; the types of individuals he surrounds himself with share the same qualities of character and integrity as Peissig.

“Mailstream” is a new fully automated Direct Mail Finishing System that converts press sheets into finished mail products. Because of its small footprint, Mailstream is ideal for all size printers who want to bring mailing services in-house. With smaller space requirements, a low cost basis and high levels of automation and production, the Mailstream offers high profit potential to the mail finishing process.

I RECENTLY had the opportunity to attend ad:tech at Moscone West in San Francisco. This conference and trade show takes place annually in nine different venues around the globe (www.ad-tech.com). It is an interactive advertising and technology conference and exhibition that blends keynote speakers, topic-driven panels and workshops to provide attendees with the tools and techniques they need to compete in a changing world.

DIGITAL PRINTING is in? need of a press agent, or a PR? firm that can boost its image and explain to the masses exactly what it is capable of performing. But John Roberds, founder and president of Tulsa, OK-based Odyssey Digital Printing, knows that the role of educator, promoter and cheerleader falls squarely on the shoulders of his venerable sales staff.

Former Story Communications and Webstar Printing owner Mike Story pleaded guilty to lying to his bankers, and will serve six months "shock probation" in state prison and receive another 10 years of probation upon completing the six-month stretch, the Seguin Gazette-Enterprise reported. He has also been ordered to pay nearly $600,000 in restitution.

Magazines are finding success with interactive content and QR code technology is spreading its reach.

CHICAGO—The proposed acquisition of North America's second-largest printer by the biggest of them all would create a giant of unparalleled proportions. The question is, would such a deal be a violation of this nation's antitrust laws? In a sense, would it also be the best thing to happen to the printing industry in years?

Service With a Savings

What makes a visit to your favorite restaurant even more enjoyable and memorable, notes Frank Tantillo, is when the staff brings you "a little extra touch of something." Be it a complimentary glass of wine or a dessert, the gesture—no matter how small—is enough to bring the customer back.

IT'S NO secret. Today's economy is filled with uncertainty. One day, consumer confidence is up and things look promising. The next day, some bad economic news casts a pall over the outlook. With a tiny advertising budget, it can be difficult to find ways to boost your bottom line.

PRESIDENT OBAMA and  Congress have created and implemented a $787 billion Stimulus Package. I studied the package, but I can’t find one-dollars-worth of stimulation for the graphic communications industry. Nary a nickel!

Visions, Inc. of Plymouth, Minn. has announced the acquisition of Printing Arts, Inc. of Brooklyn Park, MN, and Affinity Marketing of Edina, MN, making Visions, Inc. one of the largest Native American-owned marketing services companies in the United States. The new company will market itself as Visions.

END_OF_DOCUMENT_TOKEN_TO_BE_REPLACED
Subscribe
Upcoming Webinars
Inkjet: It is Here and Now