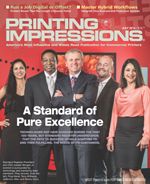 Trivia time, folks. Who lives in a pineapple under the sea? Hint: Apparently, he drives a 2014 Toyota Highlander, as well. Anyone who has spent any amount of time absorbing the escapades of the happy little sea sponge—known as SpongeBob SquarePants—and his annoying starfish neighbor from the Nickelodeon cartoon, knows that he has never been able to pass his boating test. Thus, SpongeBob will have to spend his time as a passenger in the Highlander.

A printer tasked with handling 10,000 pages of sensitive evidence, plus audio and video recordings related to a federal court case, was the victim of a May 25 break-in, according to KTVU-TV, although it appears none of the evidence was stolen. The break-in occurred on the same day the U.S. Attorney's office had dropped off evidence at the printer to be copied for distribution.

Dana on Marketing Messages: What Is 'Value' To Print Buyers?

Customers who truly value a printer want to maintain a long-term relationship with that printer. They'll sing the printer's praises to their managers and refer them to others. It's the sort of WOM (Word of Mouth) marketing that all businesses want. So I wrote to a few buyers and printers to get more insight as to what value really means.

To demonstrate its numerous printing systems to the European market, Canon recently held a two-week event at its Customer Experience Center in Germany, called Canon for Business 2014. More than 2,600 customers visited the facility, where they attended seminars and watched demos of Canon's wide-format, cutsheet and continuous-feed digital output devices.

Digital or Offset: Not a Clear Choice—Mark Michelson

The growth of digital printing has been a boon for many printing establishments in terms of on-demand output with less skilled labor, and personalization capabilities to increase response rates. But some printers still long for the comparative simplicity of large-quantity runs, with generous delivery deadlines, only on offset presses. Those days are forever over, and we all know the production pace will only quicken.

Farquharson/Tedesco on Businesss Development: A Translation Guide for Sales

As salespeople, we hope that the meaning of our words are completely clear to our customers. However, it's not always easy to understand and be understood due to misunderstandings being misunderstood. As a service, we present the following: a guide to help salespeople translate what is really being said by a client. Let's begin as we first aim to get an appointment...

Nestled between O'Hare International Airport and Chicago in Harwood Heights, IL, FCL Graphics has been pumping out printed products for more than 40 years—and at the same address, no less (although it has expanded). Even amidst an uncertain future for print, the company's roots have remained firm. But its success has been centered around its ability to bend and grow with the market. These days, it's almost essential that a printer offer a menu of ancillary services in order to thrive. FCL does just that.

Constructing PDF files properly has become critical to production efficiency. Poorly constructed PDF files can impact print service providers in two ways. Firstly, the additional processing they require slows down the digital press, reducing the return on investment (ROI) and disrupting production schedules that are typically tight, particularly for variable data direct mail and transactional printing. Secondly, they can make the DFE more expensive because, to expand the processing capability, the press vendor builds in more hardware than would be necessary if all jobs were well-constructed.

Grocery store circulars, fashion flyers, furniture and appliance advertisements. One usually thinks of these as smaller parts of a larger whole, like a daily or weekly newspaper. But, for Nicholas Maiale and his crew at Pennsauken, NJ-based Inserts East, these free-standing inserts (FSIs) are shining stars themselves.

Given the pace of business today, printing firms have to transform to stay ahead of client needs. Savvy shops are moving quickly to integrate and automate business and production systems across their operations. Leveraging process integration in a hybrid environment offers a clearer path to profitability and productivity.

When it comes to variable data work, digital printers are the ones doing touchdown dances. And on the long-run end of the spectrum, offset printing still reigns supreme. But in the realm of short-run, static work, where digital and offset both frolic, there is harmony in the versatility of being able to use one production process or the other.

RPI, a provider of personalized print services for businesses worldwide based here, announced it is expanding its Atlanta-area facilities by 70 percent in order to accommodate growth in its printed photo merchandise and corporate communications business units.

Standard Register, a provider of workflow, content and analytics solutions, announced that it has been awarded a patent for a chemically-reactive security ink that helps mitigate or reveal certain types of document fraud by preventing the chemical alteration or "washing" of secure documents.

Standard Register: Where Innovation Has Led to a Century of Success

Standard Register, the Dayton, OH-based firm founded 102 years ago on the strength of Theodore Schirmer's pinfeed autographic register, has survived through the years, written and rewritten its business plan, and continues on the path of relevancy, as evidenced by its $720 million sales performance in 2013.