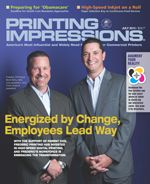 Ball State University has cancelled its plans to use eminent domain to buy property that includes a printing business for the construction of a $25 million learning facility for hospitality and food management students, the student-run Daily News reported. Hiatt Printing had been threatened by the proposed McKinley Commons center, which would have included a living-learning center/lab with a hotel and restaurants.

Tony Langley, the man who rescued the then-insolvent printing press manufacturer, is an ardent racer who recently entered his manroland sheetfed vessel (dubbed Weapon of Choice) in the 2013 Musto Vice Admiral's Cup, hosted by the Royal Corinthian Yacht Club at Cowes in the United Kingdom. Direct mail specialist Three Dog Logistics of Baltimore recently did its part to help out the Girl Scouts of America in delivering some cookies and smiles to military veterans and their families.

The Postal Reform Act of 2013 is at the discussion draft stage on the House of Representatives side, with House Oversight and Government Reform Committee Chairman Darrell Issa outlining some of the highlights in order to solicit broad input prior to introduction.

The presses are good. The substrates are good. The software is good. And, as Cathy Cartolano, VP of sales and technical services at Mitsubishi Imaging (MPM), says, image quality is "scary close" to offset. So why doesn't continuous-feed inkjet dominate the market?

In her column this month, Margie Dana shares seven human behavior triggers that were presented by Nancy Harhut, chief creative officer for the Wilde Agency in Westwood, MA, at a direct marketing conference hosted by NEDMA (the New England Direct Marketing Association) in May.

This is a tough industry facing some tough times. You certainly can whine the day away and be perfectly self-justified in your own mind. Prices are indeed brutal out there and the definition of the loyal customer has absolutely changed. Change with it or perish. Adapt or disappear. Step up or step out. You certainly will not be missed.

Randy Hedrick, the 49-year-old owner of Palm Printing in Sarasota, FL, died suddenly June 4 when his vehicle crashed into the building that housed his company, the Herald-Tribune reported. The paper quoted Florida Highway Patrol (FHP) as saying that Randy Hedrick, a resident of Bradenton, FL, was pronounced dead at the scene.

Frederic Printing, a Consolidated Graphics (CGX) company based in Aurora, CO, does its job when it comes to having the right people in place. The firm is always aggressively seeking out new talent. Chris Greene, Frederic president, notes that Denver is not exactly a printing mecca, so he usually has a fairly strong sense of who's out there and who might complement the existing Frederic staff.

Most of the buzz involving Patient Protection and Affordable Care Act (PPACA) of 2010 is the "pay or play" stipulation. Employers with more than 50 full-time workers must decide if they will offer health insurance or pay the penalty and have their employees use the state insurance exchanges.

Nothing 'Green' In Going Paperless –Michelson

The next time you get a bill or statement with a marketing insert urging you to "go paperless, go green," stand up and shout out Howard Beale's infamous refrain while dropping that insert out of an open window. Just make sure that it falls directly into a paper recycling bin.

Web-to-Print: A Path to Buyer Satisfaction

Since its early adoption beginning in the 1990s, Web-to-print has grown to become an integral part of the printing business for service providers and the customers ordering print and media. The implementation of these systems has broadened the customer reach and awareness for the service providers who have adopted this technology, while allowing customers the access to the self-service information they desire. As a result, Web-to-print storefronts have become an important part of how the printing business maintains a customer relationship.