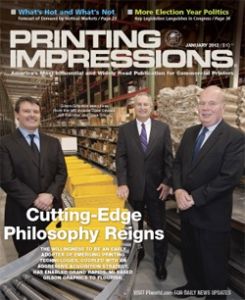 As 2012 unfolds, it will be the year of cross-media mastery—the smart management of the print-to-mobile (P2M) information chain. The imperative for printing industry companies is simple—grow laterally by enlarging their offering. Demand will grow by 4 percent or more in only nine of the top 25 hot markets for printing services.

Three of the four issues of most interest to Printing Industries of America (PIA) and its lobby—health care, taxes and regulatory—are industry agnostic and impact most Americans. And, while postal reform could impact thousands of workers and the nation's mail system, it is mostly driven by the mailing community.

When long-time friends and colleagues Norm Friedman and Daniel Luka decided to launch Skokie, IL-based DreamWorks Graphic Communications, the partners acquired all of the assets of a 60,000-square-foot commercial printing business and, in just five months, completely renovated the facility, brought in new equipment and hired a full staff.

Direct marketing solutions provider IWCO Direct has purchased a portion of the assets of DGI Services, a former direct marketing services firm based in Swedesboro, NJ. There was a bit of controversy surrounding the closure of DGI Services. In a letter to employees explaining the decision, “industrial sabotage” was the given reason.

David Lyle, 57, was sentenced last month to three years of probation and six months of house arrest for embezzling more than $70,000 from Shweiki Media, according to the San Antonio Express-News. Lyle, who pleaded guilty in June to one count of wire fraud and had four other counts against him dismissed, was the former CFO for Shweiki, which prints magazines, newsletters and catalogs, among other things.

Paul Deutsch didn’t even make it to the national anthem after being signed by the NHL’s Minnesota Wild as an emergency goalie on Nov. 23. Deutsch spends much of his time running a screen printing shop in a St. Paul, MN, suburb. At age 51, the NHL dream had long since set sail for a guy who hadn’t played in a competitive league since the Carter Administration.

Imagine! Print Solutions announced it has signed a letter of intent to acquire DigiGraphics Inc., also located in Minneapolis. DigiGraphics will continue to operate independently, but the partnership will expand the service offerings of each company and create new opportunities through greater resources.

In an era that admonishes printers to think differently when it comes to their product and service offerings, the mission of the Graphics of the Americas Conference & Expo is to provide attendees a blueprint of the future.

“Are great woodpeckers (re: print sales reps) born or made?” Scientists are divided on the subject. There is a contingent who believe that the qualities that make up a great woodpecker must be present at birth—woven into their DNA.

Starting a Web-based business four years ago has been the right move for New York-based digital printer Best Value Copy, the online division of Red Rose Document Solutions. As many long-time customers began to discontinue their printed jobs as their jobs migrated to the Web and no longer were being produced on paper, founder Robert Stokvis, and his son Mark Stokvis, vice president of sales and marketing, decided to create an Internet printing company, Best Value Copy, to offset the decline in their traditional print-on-paper business.

Readers Will notice some changes to Printing Impressions beginning with this month's edition. Coupled with a smaller trim size, we have redesigned the magazine to make it more reader-friendly and aesthetically pleasing. But, while our "packaging" may have altered, the contents remains the same with an editorial recipe that incorporates a blend of insightful news and analysis, profiles of successful printing operations, long-standing departments and columns—sprinkled with a dash of humor and entertainment, for good measure.

The belief behind the founding of the Graphic Arts Coalition is that managing a successful printing company is the most difficult managerial job in all of business, industry and government. Hence, a manager from our industry should make a great president.

Vistaprint N.V. has carved out a deal to acquire Silver Spring, MD-based Webs Inc., which provides a do-it-yourself suite of Websites, Facebook pages and mobile presence solutions for small businesses, for $117.5 million payable at closing. The company's revenues for the calendar year 2011 are forecast to be approximately $9 million.