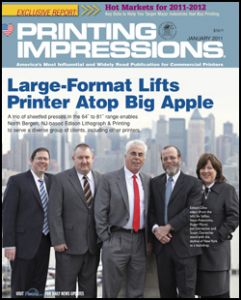 Up! That is not a misprint. There will be a slight appreciation in real pricing and raw demand for our medium in the New Year. A GDP of $15.4T will support nearly $204B of print. Seven of the Top 25 categories will demand 4 percent to 8 percent more print in 2011.

The January issue is the perfect month to look at what's on the legislative agenda for 2011. There are some long-term projects of great importance to the printing industry, and we'll take a look at each of these items and the prognosis for anything happening in 2011.

Digital printing news, including coverage of MGI’s JETcard at the Cartes 2010 card show and the Media Evolved Conference, organized by Advertising Age, including Eastman Kodak’s participation.

Edison Litho is a bit of a rare bird. It has wondrous printing capabilities—powered by a trio of large-format KBA sheetfed offset presses—and leading positions in the retail, entertainment and packaging sectors. And, 40 percent of its brick-and-mortar business constitutes work for the trade.

Co-locating with GOA next month are FESPA Americas, the Solutions Event and the cre8 conference. According to George Ryan, GOA president, the convergence of events was orchestrated to expand its offering to a greater audience in the global print market.

Making It All Work

Edmunds Communications Group considers itself more than just a printing company, but rather a communications company that specializes in printing. The 120-employee operation serves 300 clients nationwide, and has experienced a double-digit sales growth in both its traditional offset and digital divisions.

Oprah's Book Club segment on her talk show—which recommends new books and classics, in addition to some obscure titles—has often created best-sellers. Such was the case with "The Book of Awakening" by Mark Nepo.

The Whiting mill currently operates two paper machines, which produce approximately 250,000 tons annually of coated paper used by the publishing and printing industry, with a focus on magazine and retailer markets.

We recently found a tale about a Minnesota man, Jeff Eckert, who set aside his nearly 20 years of service to the printing industry in order to follow a dream. Eckert wanted to own a pizzeria.

Hectic schedules can hinder telephone calls, especially if the call recipient is known to be, err, long-winded. However, try not to fall into the electronic-only communication trap because it doesn't work, especially in sales!

Most Viewed stories from Printing Impressions’ daily e-newsletter—Today on PIworld—for the past month.

Simplified addressing enables business mailers to use mail delivery route information, instead of names and exact addresses, to reach target customer groups in specific areas. Its use was expanded to flat-size mailpieces and irregular parcels delivered on city routes.