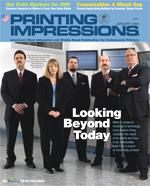 EVEN AS THE overall economy plummets to well below zero in real GDP, the New Year has some “highs” in the forecast. There are some very warm and, yes, hot spots for print, but marketers must rise above the clouds of gloom and change the climate. It will leave competitors feeling under-the-weather.

Printing Impressions' Across the Nation Commercial Printer News for January 2009

RR Donnelley is consolidating the assets of its Minnesota plants in Eden Prairie and Chanhassen under one roof in order to reduce cycle times and minimize handoffs between facilities. The workflow will be re-engineered in a newly configured footprint at Chanhassen, allowing the printer to better meet customers’ transactional marketing communications needs in major metropolitan areas.

DuBose Steps Down from Vertis Lead

Mike DuBose’s two-year stint as CEO of Vertis Communications came to an end with his January 1 resignation. The company has named Stephen Dyott as vice chairman and Alex Sorokin as interim president. DuBose presided over the acquisition of American Color Graphics (ACG), as well as Vertis’ reorganizational bankruptcy. Dyott, who previously served as ACG’s chairman/CEO, will serve as a senior advisor to the board. Vertis has hired an executive search firm to assist in securing a permanent CEO.

TWO PREDICTIONS for the 2009 calendar year: Barack Obama will be sworn in this month as the 44th president of the United States, and printers will endure an even tougher year than they did in 2008. Sorry...with the economy being what it is, the editors at Printing Impressions can’t even afford to go out on a limb. And, when it comes to forecasting the fortunes of printers for the final year of the millennium’s first decade, it hardly takes Nostradamus to tell us that economic pressures will cast a heavy burden on printers in 2009.

For Once, the Customer's Wrong --Cagle

WELCOME TO 2009! I hope your year has gotten off to a tremendous start. Time to shake off the 2008 blues and get going on a positive note. But first, a negative note from the twisted vault that is my life’s experiences. I offer, for your consideration, the latest, greatest injustice on a customer service level.

ONCE FORCES to be reckoned with, countless printing companies have gone out of business by under-pricing unprofitable work. In these harsh economic times, it is more tempting than ever for print suppliers to drop prices and lowball the cost of print projects. But printers that do this inevitably end up shooting themselves in the foot. The words of Paul Nathan of the Lotus Press ring as clearly today as they did when he published “How to Make Money in the Printing Business in 1900.”

Check printer Harland Clarke is closing a pair of plants: one in Charlotte, NC, and one in Mounds View, MN, leaving 225 total people out of work, the Charlotte and Minneapolis/St. Paul Business Journals reported. The Charlotte facility, which employed 100, is slated to close its doors in late March. In Mounds View, where 125 are employed, the plant is set to be shut down by the end of this month.

Hey Bud, This One's for You --DeWese

THIS COLUMN is a true story. This true story is one of guts, innovation, hard work and, hopefully, success. Not my guts. Not my innovation. I will be talking about Bud’s success. The owner of a $3 million printing company down South sent me a long e-mail. I’ll skip the part where he tells me that I’m the greatest living column writer and that I deserve the Pulitzer Prize. Here is what else he told me:

RECENT ECONOMIC events have left many of us feeling more like we’re auditioning for some “extreme challenge” reality series than running a business. Yet, the clamoring waves and munition shortage are not creating castaways of everyone. Many print companies thrive—in good times and bad—despite even the most harrowing circumstances.

I  HAVE written a great deal about marketing strategies in this space, including everything from marketing basics to self-promotion and integrated communications strategies. One area of marketing that is often overlooked is the role of providing support to the sales force.

A few years ago, actor Mel Gibson had the lead role in a Hollywood film called “What Women Want.” Perhaps Monarch Litho, of Montebello, CA, can produce a documentary highlighting their capabilities and call it “What GPO Customers Want.”

JOHN PHILLIPS may never enjoy freedom again. As an inmate at the Northern Regional Jail and Correctional Facility in Moundsville, WV, the 41-year-old is serving a long sentence that may very well keep him behind bars for the rest of his life. But that hasn’t stopped him, and about 40 fellow inmates, from participating in the prison’s PrintED-accredited graphic communications training program run by the West Virginia Department of Education. The program includes men from age 18 to some in their 60s and 70s.

IT’S STRIKING what a difference a year has made in the outlook for paper and ink. Both are being buffeted by economic and market forces. Paper companies started 2008 by continuing their string of price increases, but ended the year scrambling to make production cuts fast enough to bring supplies in line with sinking demand. Throughout the year, they also had to contend with the snowballing of interest in chain-of-custody certified stocks.

Quebecor Inc. was unsuccessful in its recent bid with the Quebec Superior Court to stop its former printing subsidiary, Quebecor World, from purchasing a press to produce advertising inserts, according to Canadian Press (CP). A U.S. bankruptcy court also gave the green light for the purchase of two other presses, for a total investment of US$50 million.

Leading Media Print Group, created by the 2006 merger of Times Litho and Northwest Web, has gone under. The Times Litho plant, in Forest Grove, OR, dismissed 70 employees in November, according to the Portland Tribune.

SOMETIMES THE littlest things can mean a lot. Like carefully reading the job order and getting the specs right the first time around. Or, finding innovative ways to turn a problem into an opportunity. Or, providing an honest professional opinion rather than simply trying to close the deal.