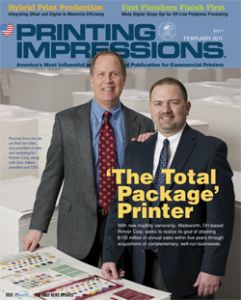 I don't know Clay Forsberg personally, but I was captivated by his recent blog that pondered how our venerable printing industry can remain viable in a new world order where marketers are increasingly drawn to electronic communication and social media.

Corporate and agency print customers have common expectations from the printing industry. Naturally, high-quality printing at a fair price is Number 1. I rarely see bad printing anymore. It's easy to get jobs done well. So, tuck that expectation in your breast pocket.

Consolidated Graphics (CGX)  announced that it has acquired The Jackson Group, including Jackson Press and Total  Response, both headquartered in Indianapolis. Terms of the deal were not revealed. The Jackson Group was founded in 1961 by Ron Jackson, initially as an art studio, but evolved into a full-service printing, mailing, fulfillment and technology company

Classic Graphics has acquired Belk Printing Technologies for an undisclosed sum, creating what is said to be the largest privately owned commercial printing company in the Carolinas. David Pitts, co-owner of Classic Graphics, sees the acquisition as a good fit.

As printers become more specialized, it makes the in-/near-/off-line decision making process clearer. Turnover times and run lengths continue to shorten, but the need for quality hasn't been compromised, prompting many printers to take their finishing functions off-line.

The former bookkeeper and office manager of Roemer Printing has pleaded no contest to two counts of misdemeanor theft. Maureen Beers was accused of giving herself unauthorized pay raises totaling roughly $123,000 over a period of years, the Baraboo News Republic reported.

Entrepreneurs are a rare and sometimes strange breed. They see opportunity in a "Dang, why didn't I think of that?" kind of way. They are never satisfied with the status quo and they understand the need to constantly challenge the present in order to have a future.

An Illinois commercial print broker pleaded guilty to making false statements in a bid submitted to the U.S. Government Printing Office (GPO), the Department of Justice announced. This case is the first to arise in an ongoing investigation of bids to the GPO, and is being conducted by the Antitrust Division's National Criminal Enforcement Section and by the GPO's Office of Inspector General.

How to Become a Superstar –DeWese

Hybrid print production, or the integration of digital and offset printing, can take multiple forms and be defined in different ways. Examples include digital imprinting of preprinted offset shells, running inkjet heads in-line with a web offset press or binding line, and building a common workflow for processing files output to a digital press and computer-to-plate system. (Includes Web-only sidebar and bonus video content.)

NPC (News Printing), the pride of Claysburg, PA, can also stake its claim as king of the U.S. Government Printing Office (GPO) hill for the second straight year after being named the top winner in the GPO Top 50 list of print suppliers. (Only the Top 10 appear below.)

Even after 38 consecutive years without suffering a year-over-year sales loss, Rohrer Corp. is seeking growth through acquisition, not just of the organic variety. Following the switch of majority ownership from John and David Rohrer to a private equity group in late 2009, the company began to embark on negotiations with various package printing companies.

Mutoh Industries, which manufactures piezoelectric printers, sponsors a pair of Rusty Wallace Racing (RWR) cars that compete in the Nationwide series. In 2010, those cars were driven by Steve Wallace—Rusty's son—and Brendan Gaughan. The accompanying photo above shows the RWR cars in action.

The Bureau : (Grand)Mother of Diversity

Chairwoman and CEO Lynne Alexander has positioned the 113-year-old firm well for the future, backed by a $7 million capital expenditure initiative that includes a six-color, 73″ manroland 900 XXL large-format sheetfed press with in-line aqueous coater as its centerpiece.

The most viewed stories from Printing Impressions’ daily e-newsletter—Today on PIworld—for the past month.

The United States Postal Service (USPS) has filed new mailing service prices with the Postal Regulatory Commission (PRC). The increases are limited by law to the Consumer Price Index (CPI) cap of 1.7 percent. The new rates are slated to take effect April 17.